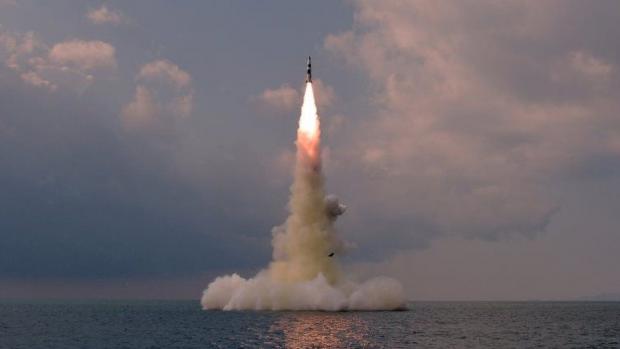 North Korea has test-fired what is believed to be a submarine-launched ballistic missile which landed in the ocean off its east coast.

Two 'ballistic missiles' were launched, the South said, flying 280 miles at a maximum height of 40 miles before crashing down in the East Sea.

It is unclear how the missile was launched, but the fact that it took place at the submarine shipyard suggests it could have been launched from one of the North's subs. If confirmed, it would be the first time that has happened.

North Korea has tested submarine-launched ballistic missiles (SLBMs) before, including one underwater launch in 2019, but it is thought that missile was fired from a submerged platform rather than a submarine.

Confirmation of a submarine launch would mean dictator Kim Jong Un has added another deadly nuclear-capable missile to his ever-growing arsenal.

Japan's Prime Minister Fumio Kishida said his country is analysing whether North Korea launched SLBMs, as he suspended campaigning for the country's upcoming election to return to Tokyo and keep an eye on the situation.

The test comes just days after it was revealed that China had tested a new orbital vehicle - thought by analysts to be a hypersonic nuke. Beijing denies this, saying it was actually a civilian spacecraft.

Analysts believe the Chinese could have been testing a new version of old Soviet nuclear technology called FOBS, which is designed to evade missile detection and defence systems.

Meanwhile South Korea's Joint Chiefs of Staff said: 'Our military is closely monitoring the situation and maintaining readiness posture in close cooperation with the United States, to prepare for possible additional launches.'

South Korea's presidential office was planning to hold a national security council meeting later in the day to discuss the launch.