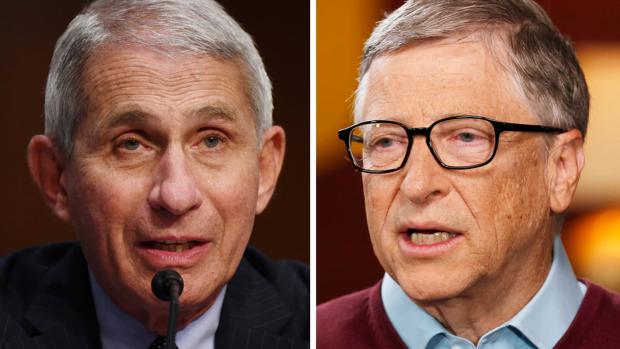 The antivaxxer lawyer, 67, who is the nephew of former president John F. Kennedy, Jr., accused politicians, the media and big corporations of conspiring to 'execute the controlled demolition of American constitutional democracy'.

The conspiracy theorist, who last week wrongly claimed that Covid vaccines had killed more people than all vaccines 'over the past 30 years', also said those who criticize the government are censored on YouTube.

RFK Jr was speaking to Donald Trump's former fixer Michael Cohen, who was released from home confinement Monday after serving a three-year term of house arrest and federal prison.

He told Cohen's podcast Mea Culpa that Gates, who he alleges is funding media to promote his own views, should face a probe over Covid, although he fails to mention why.

Cohen asked: 'Based on your findings, do you believe that Dr. Fauci and Bill Gates should be investigated for criminal wrongdoing?'

He then added: 'Of course. I mean, I think Fauci's policies, 80 per cent of the people who died from COVID should not have died.

'Why is that a success? Of course he should be criminally prosecuted because what he did was clearly, clearly demonstrably purposeful.

'And I can prove that in front of a jury. And if you read my book, just the first chapter, you will see that indictment laid out clear as day.'