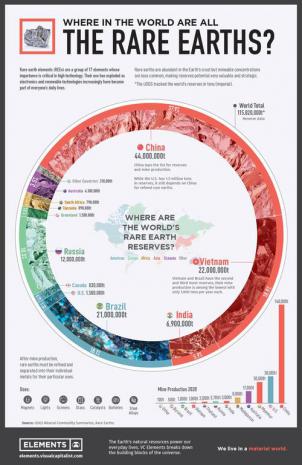 This infographic features data from the United States Geological Society (USGS) which reveals the countries with the largest known reserves of rare earth elements (REEs).

What are Rare Earth Metals?

Scandium and yttrium are not part of the lanthanide family, but end users include them because they occur in the same mineral deposits as the lanthanides and have similar chemical properties.

The term "rare earth" is a misnomer as rare earth metals are actually abundant in the Earth's crust. However, they are rarely found in large, concentrated deposits on their own, but rather among other elements instead.

Rare Earth Elements, How Do They Work?