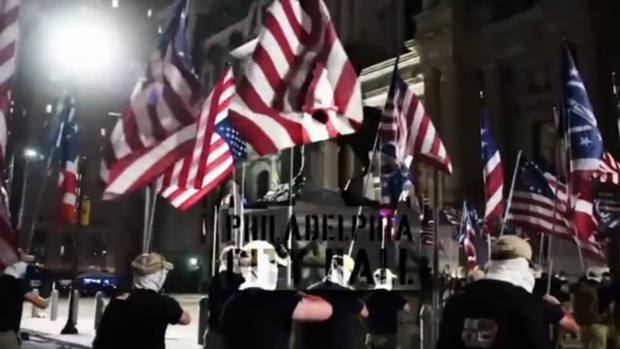 The group of over 100 people donning khakis, white masks, sunglasses, blue jackets, brown boots and shields marched by the White House to the National Mall, where the group's so-called leader Thomas Rousseau gave a speech about how democracy has failed.

Rousseau claimed the march was meant to serve as an "exhibition of our unified capability to organize, to show our strength–not as brawlers or public nuisances, but as men capable of illustrating a message and seeking an America that more closely resembles the interests of its true people."

One of the tenets of this totally grassroots group is the implementation of a white ethno-state and the mass exclusion of non-white races, according to the Southern Poverty Law Center, which also describes how the group was born from Vanguard America, who led the "Unite the Right" rally in Charlottesville in 2017.

Many on social media claimed the march was simply a psychological operation conducted by feds, evidenced by their matching masks and uniforms, identical American and Betsy Ross flags, and absence of typical conservative messaging of low taxes, less government, and opposition to leftist policies such as open borders.