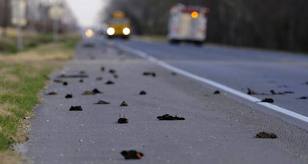 It's been said that Mankind will destroy itself. Unfortunately, during the past 100 years the human race has worked hard to make this prediction come true. Nuclear arsenals can destroy Mankind many times over. Alien biological weapons exist that can annihilate all humanity. Toxins are available that are so deadly a few drops in a city's water supply can kill millions.

Yet another weapons technology has been under development for some decades. Scalar technology—invented by the genius Nikola Tesla early in the 20th Century—has the potential to turn the environment itself into a weapon and tune its deadly properties into a merciless, near instantaneous killer. That advanced technology may have just been tested in Arkansas and Louisiana. Ominous evidence is steadily growing that the bizarre red wing blackbird deaths—now being reported across three states—are not natural. Although some scientists have proposed that the initial bird death—numbered at 5,000—might have been caused by fireworks, ornithologists scoff at that suggestion. Other theories floating about include speculation that severe updrafts or a local micro-burst killed all the birds, yet that is highly improbable and does not jive with eyewitness testimony of local residents who watched the birds literally drop from the sky. Other witnessed claim that not all the birds that fell were already dead. Some were still alive and appeared confused or dazed. A few even made desperate attempts to seek shelter inside houses—seemingly trying to escape whatever was killing them outdoors. A freak meteorological phenomenon also cannot account for reports of mass bird deaths that followed the Arkansas incident. Red wing blackbirds have also been seen falling out of the skies over Louisiana and reported by an eyewitness in Kentucky. "The birds suffered from acute physical trauma leading to internal hemorrhage and death," the Arkansas Game and Fish Commission said in a statement Monday. "There was no sign of chronic or infectious disease." That eliminates the possibility of West Nile virus or some other avian illness.

According to NBC News, Arkansas's official state veterinarian, Dr. George Badley, stated the blackbirds died in mid-flight, not upon impact with the ground after they fell. Either the birds ran into something…or something ran into the birds.  Fish and fowl Puzzled researchers are scrambling to determine if the massive fish death—that seemed to accompany the stricken

blackbirds—is in any way linked. Some believe they are linked. Yet other bizarre reports are still streaming in concerning other fish deaths.  Beyond the frightening mass death of fish in the Arkansas River that covered 20-miles, reports have come in on mass aquatic death off of Chesapeake Bay. And 100 tons of dead fish have washed up on the Brazilian coastline.
Brazilian officials have never seen anything like it. Some reports in the Brazilian media claim that a few coastal communities are panicking believing that the water has been poisoned. Investigating the mass fish death in the Arkansas River near a dam in Ozark some 125 miles west of Beebe, Arkansas. Beebe, a suburb of Little Rock, has about 5,000 residents. It's where many of the red-wing blackbirds met their strange end. Although the state fish and wildlife investigators say disease may be the reason why 100,000 fish suddenly died en masse, they plan to continue testing the river for any evidence of toxins. Curiously, like the birds, all the fish that died were only one species. All other fish were unaffected. Connected to advanced government weapons tests? Researchers Paul Joseph Watson & Alex Jones at infowars.com have put forward another possibility that could account for the shocking bird and fish deaths.  Watson and Jones believe evidence exists that points to secret US government testing of advanced weaponry. The two point to Scalar weapons technology. The interesting thing about their theory is that it does account for the internal disintegration of the birds' organs, the short-lived survivors' state of disorientation, and the atmospherics that were occurring during the incident. Radiation comes in many forms including, thermal, photonic, microwave, nuclear and magnetic. Scalar technology incorporates the transmission of high-energy electromagnetic radiation designed to disrupt geological and biological processes. It's a technology that is mostly secret that has been under development since the 1970s. Other than U.S. research on its applications as a militarized weapon, work is also being done to advance the technology in the U.K., Russia, China and Israel. According to Watson and Jones "Scalar weapons that can artificially manipulate the environment could be responsible for the mass die offs. We know for a fact that over a decade ago the U.S. Military Industrial Complex was aware of and involved in the testing of such technology." Both also refer to former U.S. Department of Defense Secretary William Cohen

who, during a press conference in 1997 stated for the record that “Others [terrorists] are engaging even in an eco-type of terrorism whereby they can alter the climate, set off earthquakes, volcanoes remotely through the use of electromagnetic waves…So there are plenty of ingenious minds out there that are at work finding ways in which they can wreak terror upon other nations…It’s real, and that’s the reason why we have to intensify our [counter terrorism] efforts.”

Of course what Cohen referred to was Scalar technology. The government has not been adverse to experimenting with advanced weapons—or potential weapons—near or on its own citizens. As both Watson and Jones argue:

"From the 1950's onwards, the U.S. government deliberately engaged in open air tests, spraying major cities like San Francisco and New York with Serratia marcescens and Bacillus glogigii. In 1955, the CIA also released a a bacteria withdrawn from the Army’s biological warfare arsenal over Tampa Bay, Fl in order to test its ability to infect human populations with biological agents." High frequency sonar experiments have killed countless whales, porpoises and other sea life. After years of denying it, the United States Navy finally admitted their responsibility. Other experiments with the infamous HAARP secreted away in a massive installation far in the northern wastes of Alaska have caused significant weather changes to  parts of northern Russia and specifically a wide swath of Siberia that has caused formal protests from the Russian government. And Watson and Jones also point to 1966 when "the U.S. Army dispensed Bacillus subtilis variant niger throughout the New York City subway system. 1977 Senate hearings on Health and Scientific Research confirmed that 239 populated areas had been contaminated with biological agents between 1949 and 1969, including San Francisco, Washington, D.C., Key West, Panama City, Minneapolis, and St. Louis." The government's plausible deniability "Plausible deniability" has always been the key to covert tests an operations by intelligence services and military operations—especially tests conducted over populated areas. Scalar technology can be tuned. Patents that have been granted support that capability. This tuning ability permits the electromagnetic frequencies to zero-in on specific biology such as a certain species of bird or fish…or humans too. Only red-wing blackbirds died—in midair, during flight. No other species of avian was affected. Could Scalar beams have been "tuned" to wipe out the birds? That they hemorrhaged internally and some of their organs literally melted is an effect Scalar beams can produce. Military field tests—a kind of "in situ" laboratory experiment—may well account for the bizarre deaths of the birds and fish. Scalar can be projected across thousands of miles and the beam weapon could have originated anywhere in the U.S. It might even have been activated from a seaborne platform on a naval vessel.

If that is the case, then the test would be ongoing and targeting red-wing blackbirds to assess the efficacy of the beam technology could easily be carried out across Arkansas, Louisiana, and Kentucky. Perhaps more incidents will occur in the near future. Another aspect of 3D Scalar technology is the theoretical ability to create aforce field bubble. If such an experiment was attempted and the flock of birds flew into that force field the aftereffects would be eerily similar to what Beebe residents witnessed. Furthermore, the what the follow-up autopsies revealed about the internal state of the birds also supports some kind of Scalar interaction with avian physiology.  The danger The inherent danger to Scalar testing is that it's a technology not yet fully understood. As Cohen stated during that press conference more than a decade ago, the technology can be employed as a devastating climate weapon. It can also be used—if a great enough power supply is provided—to literally move mountains in the form of activating dormant volcanoes, setting off gigantic, killer earthquakes and resulting tsunamis, seed ocean depressions and stimulate them into category 5 hurricanes while steering them to landfall against enemies. What better way to test the capabilities than internally, within the U.S. borders on an unsuspecting citizenry. After all, it will only kill fish and birds. Nothing will probably go wrong. No, nothing would probably ever go wrong with tests like that… Thank God the victims were only 5,000 red-wing blackbirds and not the 5,000 residents of Beebe, Arkansas. Next time, we might not be so fortunate. But then there's always plausible deniability.
http://www.helium.com/items/2056635-experts-suspect-scalar-weapons-testing-caused-mass-bird-and-fish-deaths