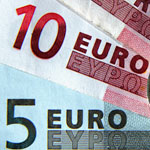 Emergency lending from the ECB to banks in Ireland fell in December, the first decline since January 2010, but only because the Irish Central Bank stepped up its help to banks. The Irish Independent learnt last night that the Central Bank of Ireland is financing €51bn of an emergency loan programme by printing its own money. ECB lending to banks in Ireland fell from €136.4bn in November to €132bn at the end of December, according to the figures released by the Irish Central Bank yesterday. At the same time, the bank increased its emergency lending by €6.4bn, bringing the total it is owed to €51bn. – UK Independent

Dominant Social Theme: The heck with a single currency. Oh, wait ... let everyone print it.