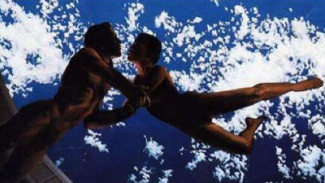 The USA's prestigious space agency, the National Aeronautics and Space Administration, loves to talk about nuts and bolts, engineering, space exploration and the life humans may discover "out there." The space agency is even willing to discuss shuttle toilets and the hurdles that had to be overcome of dealing with human waste in space. Heck, that's all rocket science. But ask any of the NASA hierarchy about one of the most human of all things—sexuality in space—and, red-faced, they will quickly change the topic.

2 Comments in Response to NASA and sex in space

Sex in space … why not? It is quite disturbing to know that NASA has also a don’t ask don’t tell policy over those creepy stuffs there. It kind of dropped my jaw in total surprise when the scientists’ concern was focused mainly on the problem of what sexual position should be recommended when astronauts make love at zero gravity. And the findings were secretly vaulted!

Americans don’t live on bread alone. Millions, especially teenagers live on sex alone. Now reaching more than 65% of babies born to single teenage and young mothers are bastards – they don’t even know who their fathers are. Sex is cheaper than food, but even more important than food.

Obama should also shatter the covering glass of don’t ask don’t tell in NASA like he did in the Military to the delight of screwed up liberals and their supporting homosexuals, gays and lesbians in the service.

Now the practice of sodomy in the frontline is allowed even when same-sex lovers are under fire from the enemy …homosexual behavior and lesbianism in the barracks practiced either in bed or in the communal shower is a privilege that Obama gifted to the men and women in uniform, same as the rights of captured Al Qaeda terrorists to a civil court trial that Obama had granted as a matter of civil rights. He is not telling the public why we are losing the war in Iraq and Afghanistan, damn it!

But I really get a kick out of some of the sites and web pages I come across (no pun intended) when looking for my images for FP.  This one gets to get linked to this article.