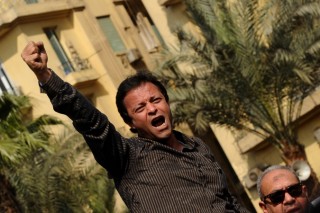 The Egyptian peoples’ revolution against their government forces to the fore the unfortunate reality that America’s friendship is an illusion created for its own benefit, a strategy, if you will, that creates a mirage of trust, compassion, and good will for the people while it disfranchises them from power, enriches the “inner circle,” establishes a brutal police force to control them, providing thereby a resident dictator that will do the bidding of America’s military-industrial complex to sustain its enormous need for on-going wars and a budget that saps the wealth of the nation itself. Mark that Egypt’s military spends 6 billion a year to maintain its million soldiers and absorbs another 1.3 billion of U.S “aid” to buy American warplanes, tanks, and helicopters. Virtually nothing is left for humanitarian needs or domestic relief. The people have had enough.

Consider Iran, perhaps our most graphic undemocratic entrance into the greater middle-east. Our CIA assassinated the democratically elected Prime Minister, Mohammed Mossadegh, and installed our own “beholden” King, the Shah of Iran. He in turn created the SAVAK police to control the people enriching his benefactors by using American tax dollars to buy weapons from United States munitions’ industries. Clever, even demonic. But the Iranian people revolted. Twenty five years of undemocratic, dictatorial rule beneficial to U.S. and Israeli interests if understood in weapons sales and oil to say nothing of the Shah’s recognition of our puppet state,  but disastrous for the Iranian people and America that now sees Iran as a major enemy in the mid-east. But we do not learn.

Now, Mubarak’s 30 year strangulation of the Egyptian people appears to be unraveling while our administration and the Netanyahu governments look on in disbelief and fear. What do we do with our 1.5 billion that has served our dictator yearly for these many decades as a guarantee of peace with Israel? To whom will it go if, as Eli Shaked observes above, the “inner circle” alone in Egypt supports that agreement and they too are deposed? The Muslim Brotherhood? Mohammad ElBaradei? The Egyptian military? An “existential” quandary certainly! Israel’s Michael Ledeen, writing in Pajamas Media, states “Mohammed ElBaradei is one of the last men I would choose for leading Egypt to a ‘peaceful transition’ to greater democracy. He doesn’t like America and he’s in cahoots with Iran and the Muslim Brotherhood.”