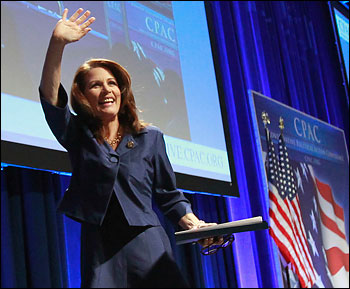 "Losers - l - Ron Paul: Yes, he won the straw poll for the second straight year. But his speech - heavy on talk of defunding the wars in Afghanistan and Iraq as well as odd pronouncements such as "Government should never be able to do anything you can't do" - displayed the limits of his reach within the GOP. Paul is a sensation, but among only a sliver of the Republican electorate."

The Conservative Political Action Conference, an annual rite of passage for Republicans with an eye on the presidency, concluded over the weekend with Rep. Ron Paul (Tex.) emerging as the winner of the gathering's 2012 straw poll.

But sometimes winning can actually be closer to losing - as in Paul's case - and losing (or at least not finishing in the top few in the straw poll) can mask a winning performance at the three-day convention.

Below is the Fix's look at some of the less obvious winners and losers from CPAC.

I attended CPAC and I'm here to say the RON PAUL R3VOLUTION was alive and in full force.  Honestly, I could feel the 3VOL energy in the very air of the place!

I hooked up with many excellent people from all over the United States. Old dear friends and more new friends.  We exchanged contact information, ideas, and plans for future events.  Freedom/Liberty brings us all together.

Once again The Phoenix contingent at CPAC didn't disappoint, we had signs and banners and NOT MY DEBT balloons, RP $20's, 2 excellent flyers, really fancy  RP silver conversion cards,  RP buttons and FREEDOMS PHOENIX "We Know The Truth" cards were given out everywhere. We were everywhere!

I hope to have photos soon.

Already with the smear camaign..