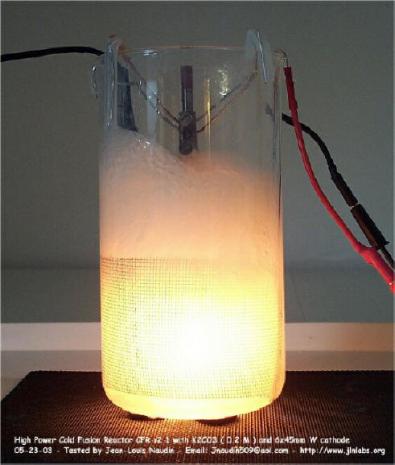 Cold fusion -- the largely discredited science of making more energy from less -- may be making a comeback.

Controversial yet high-profile demonstrations in Italy last month purported to show a cold fusion device turning 400 watts of heat power into 12,400 watts. The eye-popping 31-fold increase -- also known as an "excess heat effect" -- illustrates why lay observers say cold fusion is the "holy grail of energy independence" and why many scientists doubt, some to the point of apoplexy.

Twenty-two years ago, University of Utah chemist Stanley Pons and University of Southampton chemist Martin Fleischmann made similar but ultimately unreproducible claims that turned their 15 minutes of fame into banishment from the scientific community.

Since he's only seen second hand accounts of this latest project, University of Missouri Vice Chancellor for Research Robert Duncan, Ph.D., an expert in low-temperature physics, said he "can neither criticize nor endorse" it.

"But I do know that excess heat effects are real, and although we do not fundamentally understand their origins, the world's scientific community would be remiss if it does not seriously pursue these fascinating new observations," Duncan told TechNewsWorld.

The process is also green, giving off neither coal-fired carbon dioxide nor radioactive waste, the two men said at a standing-room-only January 14 demonstration/press conference in Bologna. A nuclear physicist associated with the Italian National Institute of Nuclear Physics, Giuseppe Levi, examined the procedure and told reporters he was 100 percent convinced.

"Very few researchers in this field have ever claimed the ability, let alone tried, to demonstrate an effect like this on demand," New Energy Times (NET) publisher Steven Krivit told TechNewsWorld. "Given that, there is probably something very real about the Rossi claim, and there are probably some aspects that don't hold up."

From this month's International Conference on Condensed Matter Nuclear Science in Chennai, India, where buzz about the Italian project was everywhere, industry observer Jed Rothwell said, "the claims are very important, and I think it is very likely they will be confirmed."

Commercial reactors that would make energy for less than one US cent per kilowatt hour -- far cheaper than competing sources -- will ship in three months, Focardi and Rossi said.

That is "a major reason for the intense interest," explained MU's Duncan.

"Pons and Fleischmann only had a laboratory model, but Focardi and Rossi are claiming immediate commercial viability," he noted.

"If the results are confirmed, they are indeed a huge step toward commercialization," Rothwell -- who runs LENR-CANR.org, a comprehensive library of cold fusion research -- told TechNewsWorld.

Focardi and Rossi were not successful.

Despite all the excitement -- online

chatter and news reports about the demo still haven't died down -- "the history of the cold fusion controversy teaches us that caution is king," said New Energy Times' Krivit.

Ever cautious, peer-reviewed journals and a patent examination have rejected the claims. The Rossi-Focardi reactor, the patent examiner wrote, "seems to offend against the generally accepted laws of physics and established theories."

Undeterred, the researchers have turned to options unavailable to Pons and Fleischmann, including a digital dandy: their own online Journal of Nuclear Physics, which they've staffed with an advisory board that includes Naval Postgraduate School physics professor Michael Melich, Ph.D.

The eyebrow-raising move has met with only mild condemnation, however, partly because evolving attitudes have thawed the ice around cold fusion since 1989. The science even has a more respectable name: "low energy" or "chemically assisted nuclear reactions" (LENR-CANR).

"Fleischmann and Pons really did discover something nuclear, but it doesn't pass the 'duck test' for fusion," NET's Krivit explained. "It's far more accurate and scientific to call the set of phenomena 'low-energy nuclear reactions.'"

"An unprecedented and widespread failure of the scientific method is partly to blame for the failure of Pons and Fleischmann," explained MU's Duncan, a former director of the Los Alamos National Laboratory Institute for Advanced Studies. "It made sense to question their results, but only insofar as the methods of the day were capable of reproducing them."

SRI International electrochemist Michael McKubre, Ph.D., has sought better techniques to check the Pons-Fleischmann approach, which reacted deuterium -- a close hydrogen relative -- with the metal palladium instead of hydrogen and nickel.

Along the way, McKubre, "a very respected scientist," Duncan said, has observed some critical experimental challenges researchers will have to overcome before they can even try to reproduce past experiments.

Particularly remarkable was the (decidedly chilly) cold fusion journey of Julian Schwinger, who with Richard Feynmann and Shinichiro Tomonaga won the 1965 Nobel Prize in Physics for one of the greatest ever physical theories, quantum electrodynamics or QED.

After studying the Pons-Fleischmann experiments, "Julian had a theory that a process tantamount to cold fusion was occurring, but even as a Nobel laureate, he couldn't get reputable journals to publish it," Duncan told TechNewsWorld.

"My first attempt at publication was a total disaster," Schwinger recalled during lectures and seminars. He had devised a hypothesis about the effect "to suggest several critical experiments," but because cold fusion had become what Duncan calls a "pariah science, poison to all who touched it," Schwinger -- graduate advisor to four other Nobel laureates who also won the U.S. National Medal of Science -- was summarily ignored.

"What I had not expected was the venomous criticism, the contempt, the enormous pressure to conform. Has the knowledge that physics is an experimental science been totally lost?" he wondered.

"Cold fusion, or low-energy nuclear science, has benefited from exciting innovations and outstanding minds, yet massive, destructive 'group think,' has given it a checkered past," Duncan explained. "Now, however, it is of paramount importance that science proceed boldly, with a determined yet dispassionate focus, on the objective study of these fascinating phenomena."