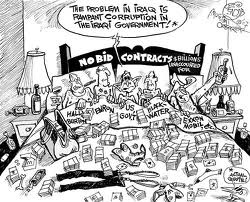 The U.S. government has wasted tens of billions of dollars on contracts in Iraq and Afghanistan and must make sweeping changes to avoid similar mistakes in the future, according to a report published on Thursday by the congressionally chartered Commission on Wartime Contracting.

The report included 32 legislative, regulatory and policy proposals to reduce waste, fraud and abuse through enhanced oversight and improved deployment of government resources.