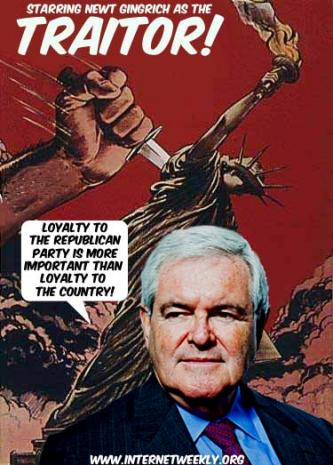 Former House Speaker Newt Gingrich found himself in a bit of a log-jam with his inner-conservative Monday night.

Appearing on a conservative talk radio program, Gingrich praised the Clinton-era North American Free Trade Agreement (NAFTA), taking the decidedly internationalist view that it was positive because it created jobs in Mexico.

Whether the economy or even the job market overall benefited from the agreement has been the subject of intense debate ever since, but most economists agree that the trade agreement has resulted in the loss of many low-skill jobs to Mexico.

But Gingrich's position on the arrangement, which succeeded in dramatically expanding the value of trade between the US, Canada and Mexico, isn't common among Republicans, today or in the lead-up to the agreement's passage.

Then, he was instrumental to the Clinton administration in helping bring Republicans around to supporting the plan. Gingrich was also a supporter of the World Trade Organization and has been consistent in advocating for the globalization of markets.

However, in today's climate, that's not likely to be looked upon with kindness by fellow Republicans, who Gingrich must impress if he's to carry the party's 2012 presidential nomination. If his response Monday night to a NAFTA question is any indication, he's still facing a steep uphill climb.

"Back in the 90s I remember Ross Perot saying that there was going to be the giant sucking sound of jobs if NAFTA passed," the caller said. "I think it ended up being true, right? And I know you were a big free trader."