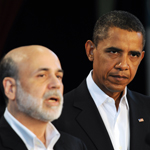 Inflation caused by Bernanke's "Quantitative Easing" may doom Obama's re-election. Here's a political equation that ought to furrow the brows of everybody working to get a second term for President Obama: QE1+QT1=DEFEAT. For those not cursed to be economists, QE1 stands for Quantitative Easing, while QT1 means "Quantitative Tightening. According to Ralph Benko, writing in Forbes, Federal Reserve Board Chairman Ben Bernanke may be about to doom the Obama re-election effort with that equation. – SF Examiner/Forbes

Dominant Social Theme: The president may be doomed by factors beyond his control. It is a kind of Greek tragedy.