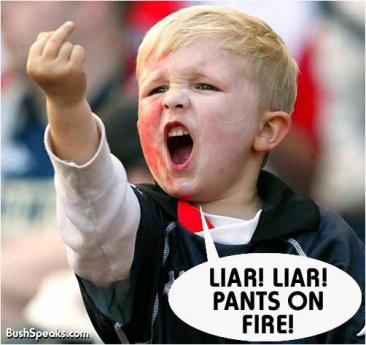 (Publisher's note: Now I know what "lying by omission" means)
From: ????? ?????? [mailto:?????]
Sent: Wednesday, September 26, 2007 3:24 PM
To: Ernest Hancock
Subject: One Million Republican Poll
Ernie,
Just received a call from an organization allegedly called "One Million Republicans".  The young lady said she had a statement, followed by a poll.  The statement, incoherently read, was essentially that the Republicans need somebody who can continue to carry the banner of Ronald Reagan.  She then asked who was my presidential preference.... Hunter (strange him being first),Romney, Guiliani, McCain, Tancredo and Fred Thompson.
I told her the poll was bogus since it didn't include Ron Paul.  She didn't know what I was talking about, so I asked to speak to her manager.  After on hold for a minute or two, a guy answered and I again told him his poll was bogus, since it didn't include Ron Paul.  He said, "My understanding is that he wasn't included since he doesn't have an exploratory committee".  After chuckling, I told him that he has raised more money in the last quarter than most of the other candidates, he's been on all the debates, and he's a viable candidate, and that he didn't know what he was talking about.  I then told him I was going to send this information out on a blast e-mail to thousands of people. That's where you come in. More evidence of why Ron is not doing as well in the "polls".
Have fun (and don't publish my name !!!)

1 Comments in Response to One Million Republican Poll

I think someone should published,not only you name,but your address also.
I guess your now on the list.
I think the list is for people that need to have their children,neighbors,and pastor informed of how their Mother is helping distort the truth and mislead Americans into following the Communist way of life.
Have you told your children what you really do for a living?