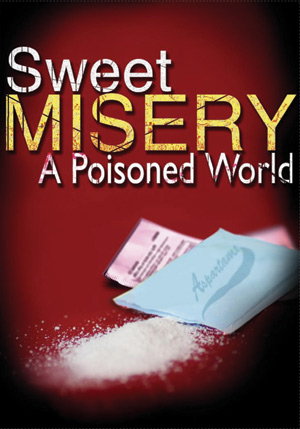 Aspartame Warning
This page exists solely to try and spread the word about the numerous & serious dangers of regular aspartame (Nutrasweet, Equal) consumption. Currently the 100+ articles on this page contain facts & opinions from over 50 doctors & nutritionists, many of which have each "cured" their patients of many symptoms (including weight gain) simply by removing aspartame from their diet. These 50+ doctors strongly recommend avoiding all aspartame products. Numerous articles detailing the unbelievable history of the aspartame approval are also provided, along with thousands of testimonials from former users. Some info. on the new sweetener Splenda (sucralose) found in Diet Rite soda is also provided.

The multi-billion dollar aspartame industry would like you believe that "aspartame kills" is an "urban legend" and that you'd have to drink 100 cans of diet soda a day to be harmed by aspartame. This is just simply not true. Their main claim is that the 3 components of aspartame are found in many natural foods and are therefore safe. This is kind of like saying carbon monoxide is safe because all it contains is carbon & oxygen, the same components of carbon dioxide. Methanol (wood alcohol), which makes up 10% of aspartame and is highly toxic (adult minimum lethal dose is 2 teaspoons), is also found in some fruits & vegetables like tomatoes. However, methanol is never found in natural foods without ethanol & pectin, its "antidotes" if you will (detailed facts below). Ethanol & pectin prevent methanol from being metabolized into formaldehyde (embalming fluid) & formic acid (same chemical as fire ant venom), both deadly toxins. An ethanol drip is even the standard emergency room treatment for methanol poisoning. Aspartame contains no ethanol or pectin, therefore the methanol is converted to formaldehyde and formic acid. Phenylalanine and aspartic acid, the other 2 components of aspartame, are amino acids found in natural foods but always as part of long chains of many different amino acids to form complex protein molecules that take humans 12 hours to gradually break down & assimilate. According to the doctors below, when consumed by themselves these 2 amino acids require no digestion and quickly enter the brain & central nervous system at abnormally high levels, overstimulating brain cells to death and causing many other health problems.

"Pro" aspartame people point to industry sponsored short term tests, ignoring independant tests. They point to "reliable" health sites, organizations, foundations etc. that are sponsored, funded & fed "facts" by companies that profit from aspartame. And of course, the FDA approved it so "it must be safe", neglecting to mention that the FDA denied aspartame approval for over 8 years until the newly appointed FDA commissioner Arthur Hull Hayes overruled the final scientic review panel, approved aspartame, and then went to work for G.D. Searle's (initial owner of aspartame) public relations firm at $1,000 a day. Hayes has refused all interviews to discuss his actions. The FDA also urged Congress to prosecute G.D. Searle for "specific false statements or concealed facts" stemming from Searle's testing of aspartame. However, the 2 government lawyers assigned to the case decided against prosecuting G.D. Searle and then joined G.D. Searle's law firm! Even the National Soft Drink Assn. filed a strong protest letter (available below) in 1983 against the approval of aspartame for use in beverages, saying "aspartame is inherently, markedly and uniquely unstable in aqueous media." Also, the FDA still allows hydrogenated oils to be used, does that make them safe?

Our suggestion: First READ ALL THE QUOTES provided below, then go back and read some of the articles. And remember, they're talking about the CUMULATIVE effects of regular aspartame consumption and that some people are more affected than others (but everyone is affected) due to a few factors including the condition of their protective blood-brain barrier. Bookmark this page and email it to everyone you know, especially pregnant women. .

A pervasive POISON amongst US!
Dear Members and Friends -

This is being sent to you since I keep hearing of reports of people on various lists I am on that know NOTHING of the dangers of aspartame. Most are not even aware Aspartame (or Neotame) is in Flinestone children's vitamins, in Kool-Aide, in all breath mint strips from the regular store, and of course it's in Diet Sodas. Most restaurants and bakeries put Aspartame in their dessert products -- or anything that requires "sweetness".
And for diabetics, aspartame is particularly deadly. Please read about Dr. H.J. Robert's experience treating diabetic patients who use aspartame and their marked improvement once they ceased using this deadly poison.
http://www.dorway.com/betty/diabetes.html

In fact, research this topic for yourself at Mission Possible's website:
http://www.dorway.com

Which brings me to the reason I found out that people in our networks are addicted to aspartame. I was sharing about our publication of The Artificially Sweetened Times and encouraging someone to read the text of it at
http://www.vaclib.org/news/astimes.htm

SO... Please review it yourself and get this information OUT THERE!!!
Following is the summary of what is in The Artificially Sweetened Times and how you can order it.
Your order supports VacLib's continuing outreach efforts... AND SAVES LIVES!!!


The Artificially Sweetened Times is a special edition, 8 page tabloid-sized newsprint publication designed to educate the public on the artificial sweeteners aspartame and neotame. Topics covered include:

We are projecting that this timeless periodical will be reprinted several times until these artificial sweeteners are eventually removed from the marketplace.
The Artificially Sweetened Times is designed to be mailed for the cost of a 1st class 37 cent stamp. It MUST be folded in half and taped or stapled to meet both size and weight requirements. We also encourage you to put them in store fronts on consignment and distribute them at community meetings.

You can view the entire text of The Artificially Sweetened Times on the internet at the following web link:  http://www.vaclib.org/news/astimes.htm

Mail your check or money order to:


You can also order with a credit card via the internet through PayPal by going to the following web link:
http://www.vaclib.org/news/astimes/asorder.htm

And if you need the REAL poop -- like how DID a poison get approved for mass consumption??? Then get the following CD:


Mission Possible Maine has ALL U.S. Senate Hearings
and Government Documentation on Aspartame’s Approval
as a “Safe” Food and Beverage Additive on a CD
$10.00 (postage included anywhere in the US and Canada)

www.vaclib.org
"Free Your Mind....
From The Vaccine Paradigm"

"When we give government the power
to make medical decisions for us, we,
in essence, accept that the state owns
our bodies."
~U.S. Representative Ron Paul

Support VacLib's work by becoming a
member or donating to our cause.
Click on the link below for more info:
http://www.vaclib.org/basic/memberindex.htm

I will believe all this scary stuff when there are well documented scientific presentations in the New England Journal of Medicine.

Pandemic of the Jabbed