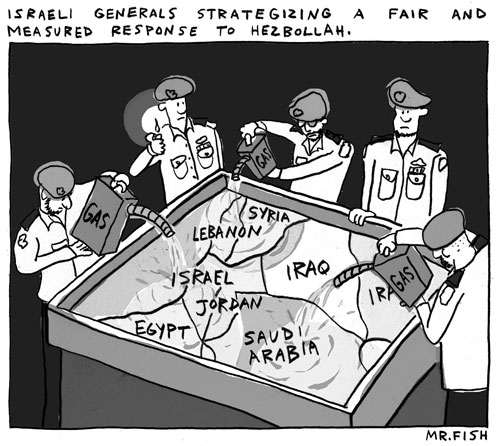 Its publisher, the Association of Arab-American University Graduates called it "the most explicit, detailed and unambiguous statement to date of the Zionist strategy in the Middle East....Its importance....lies not in its historical value but in the nightmare which it represents," what thereafter continued to unfold.

Its two essential premises include:

-- to survive, Israel must dominate the region and become a world power, and

Israel's 1967 Golan seizure and 1978 and 1982 Lebanon invasions followed the plan, Yinon noting "far-reaching opportunities for the first time since 1967, (created by the) very stormy situation surround(ing) Israel," resurrected whenever Israel wishes. Its method involves preemptive belligerence against Palestinians and regional states, making them all eventual targets to be weakened, fragmented, divided, and reconfigured under Israeli control.

In 1982, it included dividing Iraq into Shi'ite, Sunni, and Kurdish areas, what, in fact, unfolded after 2003, Shahak noting that:

"The plan follows faithfully the geopolitical ideas current in Germany of 1890 - 1933, which were swallowed whole by Hitler and the Nazi movement, and determined their aims for East Europe." They were then implemented from 1939 - 1941, "and only (a global alliance) prevented their consolidation for a period of time."

Citing the "early stages of a new epoch," Yinon said "The existence, prosperity and steadfastness of (Israel) depend(s) upon its ability to adopt a new framework for its domestic and foreign affairs," based on securing its material needs through winnable resource wars and Arab world divisions.

"All the Arab States east of Israel are torn apart, broken up and riddled with inner conflicts even more than those of the Maghreb" (Morocco, Algeria, Tunisia, Libya, Mauritania, and Western Sahara). All the Gulf states are "built upon a delicate house of sand in which there is only oil." Jordan is in reality Palestine, Amman the same as Nablus.

Other Muslim states are similar. Half of Iran's population is Persian speaking, the rest ethnically Turkish. Turkey is half Sunni Muslim, the rest Shi'ite Alawis and Sunni Kurds. Today, Afghanistan's divisions are clearer, including Pashtuns, Tajiks, Hazaras, Uzbeks, Turkmen, and others. Pakistan also is comprised of Punjabis, Pashtuns, Sindhis, Seraikis, Muhajirs, Balochs and others.

From Morocco to India, Somalia to Turkey, stability is absent, "point(ing) to....a rapid degeneration in the entire region" to be exploited to Israel's advantage. Throughout the Middle East, depravation, including hunger and unemployment affect millions, potentially explosive problems only security forces can contain, giving Israel "far-reaching opportunities for the first time since 1967."

The Six Day War's strategic error was failing to give Jordan to the Palestinians, thereby "neutralizing" today's problem by removing them. "Today, we suddenly face immense opportunities for transforming the situation thoroughly and this we must do in the coming decade, otherwise we shall not survive as a state."

He recommended far-reaching foreign and domestic political and economic changes. He also called Israel's peace agreement with Egypt a mistake, said its economy depends on acquiring oil resources without which it could be destroyed, and named two ways to get them:

-- directly by breaking the treaty; or

-- regaining control of the Sinai indirectly, Egypt no military obstacle because of its internal conflicts.

In 1956, its myth as the Arab world's strong leader was revealed, reiterated in 1967. Its economy is also in crisis, making foreign help essential. Israel's strategic aim is to weaken it further by breaking it into distinct geographical regions. If accomplished, other countries may follow, including Libya and Sudan.

"The vision of a Christian Coptic State in Upper Egypt alongside a number of weak states with very localized power (and none centrally) is the key to a historical development which was only set back by the peace agreement but which seems inevitable in the long run."

Lebanon's division into five provinces is a precedent for the entire Arab world, including Egypt, Iraq, Iran, Syria, and the Arabian peninsula. Syria will divide into a Shi'ite Alawi coastal state, an Aleppo area Sunni one, another in Damascus, and the Druzes will set up their own. This outcome will guarantee peace and security in the long run, "and that aim is already within our reach today."

Oil rich/internally torn Iraq is a "guaranteed" Israeli target, more important than Syria. In the short run, it's Israel's greatest threat. A war with Iran will tear it apart, lead to its downfall, and perhaps fragment Iran, separating its oil rich Arab speaking province from the rest of the country. Confrontations elsewhere will cause further dissolutions.

Because of internal and external pressure, the entire Arabian peninsula is vulnerable, especially Saudi Arabia. Jordan won't threaten in the long run after dissolution. "There is no chance that (it) will continue to exist in its present structure for a long time." Thus, Israel's policy should be transferring Jordanian power to Palestinians, hastened by Occupied Territory emigration, resulting in "Arabs to Jordan and the Jews to the areas west of the river. Genuine coexistence and peace will reign over the land only when Arabs understand that without Jewish rule between Jordan and the sea they will have neither existence nor security." Jordan is their only alternative, giving Israel more land cleansed of Arabs.

Otherwise, "we shall cease to exist within any borders. Judea, Samaria (the West Bank and Jerusalem) and the Galilee are our sole guarantee for national existence....Rebalancing the country demographically, strategically and economically is the highest and most central aim today."

Changes transforming world Jewry make Israel the only existential option. "Our existence is certain." Nothing can "remove us (either) forcefully or by treachery (Sadat's method)."

Second, Yinon's plan was published to win over Israeli society, especially its elites able to influence others. Problems about Arabs awareness are minimal, given their divisions and inability to understand Israeli society.

Neither is America of concern, its pro-Israeli media assumes "good intentions" regardless of policy, and the Israeli Lobby does the rest. As a result, Israel operates freely "because the world wants to close its eyes."

In 1985, Israeli President and Labor Party leader Chaim Herzog echoed the views of hardline extremists like Sharon and Netanyahu:

"We are certainly not willing to make partners of the Palestinians in any way in a land that was holy to our people for thousands of years. There can be no partner with the Jews of this land," leaving resettlement (expulsion) the only option, a favored policy today, the same one revisionist leader Ze've Jabotinsky advocated, including in a 1939 letter, saying:

"There is no choice: The Arabs must make room for the Jews in Eretz Israel. It it was possible to transfer the Baltic peoples, it is also possible to move the Palestinian Arabs." Most was accomplished in Israel's 1948 "War of Independence," again in the 1967 Six Day War. Thereafter it continued, supported and funded by Israel's Washington paymaster/partner in crime. As a result, Palestinians have been on their own resisting for over six decades, their courage and determination unreported in the West, but global support builds and offers hope.

Too bad, Lendman is right for once even though he's on the wrong side and draws the wrong conclusions. Yes, Israel has long had a plan to stop the march of horrible Islam that wants to crush it and reduce the remnant of Jews to dhimmi status in a Muslim Sharia Umma who would have to suffer 9th class status and pay a jizya tax to Muslims not to be executed, and that plan was not to exterminate the Muslims but to fracture and Balkanize their countries to keep them at each others' throats which they are so good at until they all turn to Israel for their peace and security.  Meanwhile they would resettle so-called Palestinians (there isn't such a thing, they're all just Arabs) to pure Arab territories by hook or crook, allowing the Jewish state of Israel to survive and thrive in a sea of Muslims that far outnumber them.  Unfortunately they needed full cooperation from the U.S., which instead took Henry Kissinger's advice to keep Israel "small and friendly" under a U.S. military shield, allowing the horrible Saudi puppetmasters to keep financing the final jihad to surround and finish Israel off while playing U.S. presidents for suckers, which they all were.  Now with totally clueless Pres. Obama in office, they're gaining ground by hops, skips and jumps, fooling him with the 2-state solution con when all they want is to buy time for the Hudnaist plan of a temporary truce until they're ready for the final attack. The Hamas-Fatah split is a smokescreen, since all Palestinians are told what to do by the Saudis, who could easily pay for their resettlement far away from Israel and end the whole situation.  Lendman just churns out their b.s. while cashing Saudi checks - maybe not, maybe he's just retired and lives on food stamps, like we care, he might as well be since they would pay him if he asked.

We need a new U.S. pres. who helps Israel do just what's in this plan, telling the Palestinians and the Saudis that the jig is up and they're going to help the Israelis resettle the Palestinians whether they like it or not, perhaps E of the Jordan River, with settlement help afterward, allowing a buffer zone to be built on the E side of the river for Israel's protection, perhaps guarded by U.N. peacekeepers, as if the U.S. needs U.N. support when it comes to Israel.  The new Israel will stretch from the Mediterranean to the Jordan, and while it will not be safe from a nuclear attack it will be defensible against a conventional military attack from any side, allowing Jews to live free of fear of suicide and rocket attacks.  To stop the fanatics, East Jerusalem can stay Arab, but on the W side of the buffer zone, like blockaded Berlin, with the difference being that they are free to leave anytime. After the Palestinians are resettled, they can live under the Jordan flag or start a revolt to create a Palestinian state, I'll bet they won't, since the con game will be up that they're all one people.  If the Saudis don't like it, this time they will have to come out openly and not hide and pull puppet strings, which won't be advisable since they need U.S. help against their enemies in Iran.  After Iran's nuclear capabilities are destroyed and its support for Hezbollah in Lebanon choked off, maybe the region will become safe for Israel for a long time, Lendman et al. notwithstanding.