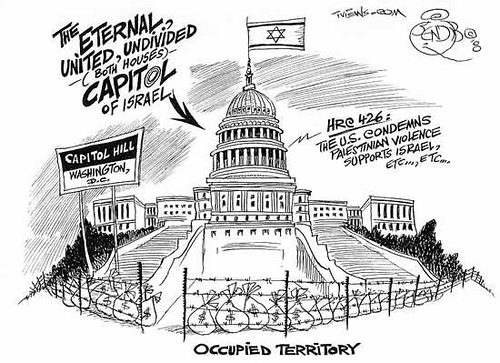 The Israeli Lobby's Poisonous Influence on US Policy - by Stephen Lendman

In his powerful 2006 book titled, "The Power of Israel in the United States," James Petras explained the enormous Jewish Lobby influence on US Middle East policies. Often harming American interests, they're pursued anyway because of its grassroots and high-level control over government, business leaders, academia, the clergy and mass media since at least the 1960s.

As a result, anyone challenging Israeli policy risks being intimidated, blackmailed, smeared, pressured, removed from positions of authority, or called a national security or terrorist threat, leaving them vulnerable to unprincipled ostracization, persecution or worse.

Among America's 52 Conference of Major American Jewish Organization(s) (CPMAJO), the Zionist Organization of America (ZOA) is the oldest, founded in 1897.

Established by B'nai Brith in 1913, perhaps the Anti-Definition League is best known.

However, in terms of its influence over US Middle East policies, the American Israel Public Affairs Committee (AIPAC) stands out. Calling itself "America's Pro-Israel Lobby," it's represented Israeli interests since founded in 1953, then incorporated in 1963 as a division of the American Zionist Council (AZC), its precursor.

In 1962, Attorney General Robert Kennedy ordered AZC to register as the foreign agent of the Jewish Agency for Israel (responsible for Israeli immigration) under the 1938 Foreign Agents Registration Act (FARA). In 1963, the Senate Foreign Relations Committee investigated AZC's stealth Jewish Agency funding. Weeks later, AIPAC was incorporated, replaced AZC, was later granted tax exempt status retroactive to 1953, refuses to register as an foreign Israeli agent, and gets away with it.

Today, masquerading as a domestic lobby, it's a stealth foreign Israeli agent, supporting policies harming US interests. Calling itself "America's leading pro-Israeli lobby," its web site says it "works with both Democratic and Republican political leaders to enact public policy that strengthens the vital US-Israel relationship."

In fact, functioning as a virtual fifth column, it's poisoned the body politic since exempted from operating lawfully. As a result, as part of the destructive Israeli Lobby, it has virtual veto power over war and peace, trade and investment, multi-billion dollar arms sales, and all Middle East policies under Democrat and Republican administrations alike.

Ralph Nader calls Washington corporate occupied territory. It's also Israeli Lobby-controlled, including AIPAC, assuring what Israel wants, it gets, but not without independent voices denouncing its poisonous influence.

Included are Jewish organizations against Zionism, a topic addressed in a previous article, accessed through the following link:

It discussed Zionism's hidden history, as well as opposition groups, including:

-- Jews Against Racist Zionism; and

With like-minded organizations and individuals, they oppose a racist, extremist, undemocratic, militant ideology, relying on belligerence, occupation, repression and dispossession, contrary to core Judaic dogma, principles and tradition. They believe it harms all Jews worldwide, and that peace, reconciliation, and co-existence aren't possible until it's repudiated and rejected.

"against Zionist lobbying installed in the United States, in particular linked to AIPAC....(an organization) constitut(ing) a danger to peace in the world because it imposes its goals (ahead) of the shared interest(s) of America...."

Founded in 1951, the American Friends of the Middle East remains an active anti-Israeli lobby.

Founded in 1982, the Council for the National Interest (CNI) "encourage(s) and promote(s) a US foreign policy in the Middle East that is consistent with American values, protects our national interests, and contributes to a just solution of the Arab-Israeli conflict." CNI aims "to restore a political environment in America in which voters and their elected officials are free from the undue influence and pressure of foreign countries and their partisans."

That position got CNI labeled an anti-Israeli lobby.

An earlier article on the Anti-Defamation League (ADL) can be accessed through the following link:

It says "hundreds of groups....organize and participate in various anti-Israeli activities," falsely claiming they spread propaganda and don't promote peace.

Formed post-9/11, it's been activist against war, imperialism, bigotry, and represents other issues, including civil and human rights, and support for Palestinian equity and justice.

It's "committed to comprehensive public education on the rights of all Palestinian refugees to return to their homes and lands of origin, and to full restitution of all their confiscated and destroyed property," according to international law.

It "promotes awareness and understanding" of the Israeli/Palestinian conflict "through educational programs for North American Christians....FOSNA seeks reconciliation between people of the Holy Land in a vision of peace based on principles of a just peace," including "the urgency of ending US support for Israel's illegal military occupation."

Its mission is "to inform and educate the American public on issues of major significance that are unreported, underreported, or misreported in the American media." It believes conflict resolution and justice depends on revealing truths, ones major US media sources suppress, supporting the worst of Israeli lawlessness.

It seeks equity, peace, security, and self-determination for Israelis and Palestinians alike, through "grassroots organizing, education, advocacy, and media." It's the only US Jewish organization providing a voice for Jews and their allies, who believe that Middle East peace is only possible "through justice and full equality" for Jews and Muslims alike.

As a religious, charitable, social, cultural, and educational group, its mission is to "move people to strive for God, consciousness, liberty, and justice, and to convey Islam with utmost clarity."

(9) Students for Justice in Palestine (SJP)

By "visualiz(ing) the Palestinian struggle," it opposes apartheid and occupation through protests, memorials, and other ways, highlighting their plight against Israeli aggression and occupation.

(10) US Campaign to End the Israeli Occupation (USCEIO)

It's a "diverse coalition working for freedom from occupation and equal rights for all by challenging US policy towards the Israeli-Palestinian conflict." Based on human rights and international law, it seeks peace, justice, and conciliation by "chang(ing) the US role," the essential way to do it.

Convening in Washington from May 21 - 24, coinciding with AIPAC's annual meeting, it highlights a "time for a new foreign policy," replacing AIPAC's-controlled one. Access its web site for more information, including how to attend, through the following link:

Over 50 peace and justice groups are participating sponsors, "bring(ing together) activists and concerned citizens from around the country to learn" about AIPAC's destructive influence on US Middle East policy, and "how to strengthen an alternative that respects the rights of all people in the region."

Organizational Endorsers and Partners include:

-- American Jews for a Just Peace;

-- Citizens for Justice in the Middle East;

-- United for Peace and Justice; and

AIPAC is a malignancy in America, lobbying for:

-- subsidizing Israel lavishly with annual billions of dollars and latest weapons and technology; and

Returning America's agenda to sanity starts with expunging this corrupting influence, replacing it with a new moral ethic for peace, reconciliation, co-existence, and equal respect for the rights of everyone abroad and at home.

Another day, another Saudi dollar in Lendman's pocket? :)

I wondered how long it would take before he started first mentioning then praising Muslims to the skies in an article about Israel that ties them to the word poison. Not very. And such a self-determined, almost theological tone in this rant. Yes, Lendman must be in possession of the absolute truth: the Quran :) That book has long told Muslims all about the evil Jews and how they want to have the Holy Land for themselves but how all good Muslims must stop it no matter what price. Lendman must have had his - and I don't mean Quran.

Yes, Israel has good relations with the U.S., and influences its foreign policy as it should to keep them safe and vice-versa, and is one of our most faithful backers in the U.N. and worldwide. Despite Lendman's fantasies, it's unthinkable that the U.S. would ever cut it loose for the Muslim World or Ummah that's still determined to not only exterminate it but dominate the entire world. For Lendman to call Israelis "racist" when they have been relentlessly and ceaselessly attacked since day one by Muslim Arabs, their genetic brothers, is pretty tawdry. Neither Judaism nor Islam are races, sorry, the Jews started out as a chosen tribe of Semites, the Arabs weren't it, oi vey pass me a matzoh ball.

Oh yes, Lendman lives in a fairy tale world where black is white and white is black as long as he's on the side giving him the green, Arab green. He recently even stated that Muslim Palestinians couldn't have killed comrade Vittorio Arigoni. What kind of balance is left in his brain, none? If given half a chance, the Palestinians would murder every last Jew in Israel and dance in the streets. It's the Jews who show all the restraint. When did Lendman lament the recent murder of the Fogel family in Samaria? I'm still waiting for his piece claiming the Israelis did it, then framed some innocent Muslims and arrested them and got them to confess. In his fairy world, the truth is whatever he makes it up to be for so many dollars per word. The Quran, of course, is sacred to him, untouchable, along with the evil it has caused and is causing; he's too busy lamenting the evil caused by the Talmud.

Sorry, Lendman, Israel is America's canary in the mine. If it goes, we've moved way up the list. Allah is not America's friend. Muslims will never make good Americans any more than they make good neighbors with Israel or anybody else. The poisonous influence on US policy is all by the Muslim enemies of Israel. Israel is our only real friend in the Middle East, now or ever, unless and until Islam is kaput, may that day come soon.