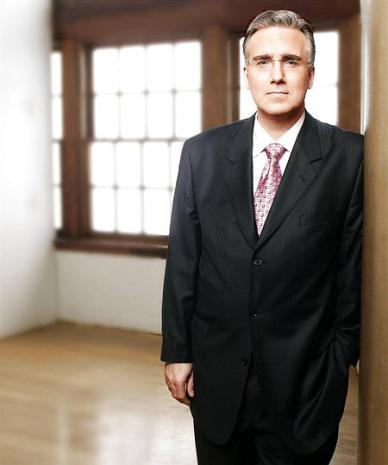 Make no mistake. He didn't quit. He was pushed, the final straw perhaps being the January 18 FCC-approved Comcast-NBC Merger. Its chairman/CEO Brian Roberts co-chaired the 2000 Republican Convention host committee, and COO Stephen Burke/now NBC Universal CEO tilts heavily to Republicans. According to Public Citizen and Think Progress, he raised at least $200,000 for Bush's 2004 campaign, served on his Council on Science and Technology, and may wish to make MSNBC another Fox, despite pledging no "interference with NBC Universal's news operations."

Think Progress asked: "Why would Comcast be interested in silencing progressive voices?" Because it opposes issues they support, including Net Neutrality, stiffer media regulation, and restraints on being able to buy telecommunications and media companies freely.

Despite having MSNBC's highest ratings, Olbermann's gone like (once top-rated) Phil Donahue ahead of Operation Iraqi Freedom. At the time, a leaked network February 25, 2003 memo to All Your TV.com, said he presented a:

"difficult public face for NBC in a time of war....He seems to delight in presenting guests who are anti-war, anti-Bush and skeptical of the administration's motives." It outlined a nightmare scenario of his show becoming "a home for the liberal antiwar agenda at the same time our competitors are waving the flag at every opportunity," promoting war, not diplomacy and peace.

For those on the far right, Olbermann, like Donahue, became too hot to handle, personality issues mattering less than staunchly right wing politics. Expect MSNBC to feature more of it, shifting more to the right like Fox and CNN, racing to the bottom to see who's more pro-business, pro-war, and anti-left of center ideologically. MSNBC's remaining prime time hosts take note.

On January 23, Washington Post writer Paul Farhi headlined, "Olbermann-MSNBC split had been brewing for a while," saying:

He "often clashed with his employers, condemning - sometimes quite publicly - directives with which he has disagreed. His departure fit a pattern (of) frequent run-ins (often) result(ing) in (him) leaving a job....His sudden exit prompted widespread suspicion of interference by Comcast."

According to one MSNBC insider, "there were strong indications that the timing wasn't coincidental. (It was) right," but not for the first time. After leaving ESPN in 1997, a network official said "He didn't burn the bridges here; he napalmed them." This time, ideology, not contentiousness, made the difference, but neither side is saying.

At issue was unabashedly supporting Obama/Democrat policies, including:

-- anti-labor opposition to the Employee Free Choice Act (EFCA), and agenda to destroy, not create, jobs when they're most needed;

-- a "Race to the Top" scheme to destroy public education;

-- endorsing preventive detention, police state surveillance, and plans to assassinate US citizens named terrorists, with or without proof; and

For months he was staunchly one-sided, revealing flawed progressive credentials for a pro-business agenda when not jousting with Fox News or his nightly buffoonery, acting more like Bozo the Clown than a newsman. It's why critic David Forsmark called his program "Meltdown," nightly "public ravings," not real news and information. Too often, it was evident by topics chosen, preferred guests, and discussions, supporting Democrat party politics, not good governance and public needs.

Georgetown history Professor Michael Kazin called him "O'Reilly on the left - completely predictable, unfunny, and arrogant." University of Chicago Professor Harold Pollack said he "can be smart and funny, but I've basically had my fill. My life is full of shticky and rude blowhards already. Why add another?" Harper's editor Luke Mitchell described him as "irritating and his obvious sexism is reprehensible," despite some positive attributes, putting him head and shoulders above his Fox and CNN counterparts.

At home one night, he penned "the first draft of a lacerating indictment of Bush, a twelve-minute-long j'accuse, addressed personally to" (him). The denunciation hit the high notes of the most fevered antiwar rhetoric, accusing Bush....his alleged puppet master (Dick Cheney and those around them) of perpetrating a 'panoramic and murderous deceit' on America and the world, (saying) 'you yoked this nation and your place in history to the wrong war, in the wrong place, against the wrong people.' "

However, he rarely "j'accused" Obama's wars or other policies the same way. In reports or commentaries, he largely exempted Democrats from jeremiads, reserved mainly for Republicans and Teabaggers, bashed separately in nightly Tea Time segments.

Perhaps he should have stuck with sportscasting, the right venue for fun and games, pranks, horseplay, and tomfoolery. Consumers of real news and information didn't find much on Countdown. Overall of course daily, the entire corporate media delivers a diet of managed news, junk food news and infotainment, supporting pro-business, pro-imperial, and pro-anti-progressive policies.

Occasionally, however, Olbermann stood tall, earlier as a fierce Bush/Cheney critic, and what a recent article explained, accessed through the following link:

Despite turning his program into a commercial for Democrats, his December 8 special comment accused Obama of turning his back on his base, saying:

"In exchange for selling out a principle campaign pledge, and the people to whom and for whom it was made, in exchange for betraying the truth that the idle and corporate rich....have gotten unprecedented and wholly indefensible tax cuts for a decade (besides unmentioned earlier ones under Reagan and generous favors from Clinton), in exchange for giving the idle and corporate rich....two more years to accumulate still more and more vast piles of personal wealth with which they can buy and sell everybody else."

"In exchange for extending what he spent the weeks before the midterms calling tax cuts for millionaires and billionaires" money they'll keep, not spend. "In exchange for injecting new vigor into the infantile, moronic, disproved-for-a-decade three-card Monte game of an economic theory (what Michael Hudson calls junk economics) purveyed by these treacherous and ultimately traitorous Republicans, that tax cuts for the rich will somehow lead to job creation," a shameless lie.

"In exchange for giving tax cuts for the rich which the nation cannot afford," and they don't deserve. "In exchange for this searing and transcendent capitulation, the President got just 13 months of extended benefits for those unemployed less than 100 weeks. And he got nothing, absolutely nothing for" the millions unemployed longer, "the 99ers."

Yet Obama is "celebrating....Mr. President, for these meager crumbs, you have given up costly, insulting, divisive tax cuts for the rich, and you have given in to Republican blackmail, which will be followed by more Republican blackmail....This is only the beginning of the reckoning. This is only the first sip of a bitter cup (without) a supreme recovery of moral health and political vigor (to) rise....and take our stand for what is right."

It was a rare Olbermann moment, bashing Obama like Bush, but apparently his new bosses thought sometimes was too much, tolerating little to the left of Fox.

Not according to New York Times writers Bill Carter and Brian Stelter, however, headlining their January 23 article, "Olbermann Split Came After Years of Tension," saying:

No matter his "track record of attacking his superiors and making early exits, (news) of his abrupt departure (came) as a shock to his many fans, some of whom accused Comcast" of sacking him.

TV insiders, however, "are astonished that (MSNBC's) highest-rated host....would be ushered out the door with no fanfare, no promoted farewell show, and only a perfunctory thanks for his efforts." Calling the decision "not a termination but a 'negotiated separation,' (it followed) years of behind-the-scenes tension, conflicts and near terminations," besides being unabashedly pro-Democrat.

The 'Charlie Brown Christmas' Special Was the Flop That Wasn't