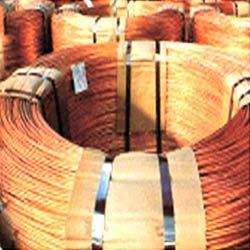 CARROLLTON, Ga., May 7 (UPI) -- Three truck drivers, showing what appeared to be the right paperwork, drove off with $500,000 worth of copper wire from a Georgia company, police said.

Southwire Corp. in Carrollton, Ga., and Jones Trucking, a Forest Park, Ga., transport broker that had arranged the pickup, only realized a large-scale theft had occurred several days later, The Atlanta Journal-Constitution reported. The companies alerted police Tuesday, five days after the copper was taken.

"The three trucks show up, load up the copper and become a ghost," Carrollton police Lt. James Perry told the newspaper Friday.

The thieves apparently learned Southwire was looking for drivers to carry three loads of copper wire to customers in Indiana from a Web site for independent truckers. Jones posted the job there.

Perry said Jones got what appeared to be a legitimate fax on LaRolle Transport letterhead listing the drivers. LaRolle denies sending the fax.

Gary Leftwich, a Southwire spokesman, said that while copper has become a popular target for the dishonest, thieves are usually not as sophisticated and competent as the ones that hit his company.

"It's a good piece of work," he said. "It's a shame they don't put these talents to good use."

According To Tesla CEO Elon Musk, This Metal Is The New Gold

Goldman Warns "Real Concerns Are Emerging" About The Dollar As Reserve Currency; Goes

"All Roads Lead To Gold" In A Credit Implosion; Holter

What's Going On With Silver? Precious Metal May Be on Verge of a Breakout

Beware of the Greatest Insider Gold Trade Scheme EVER