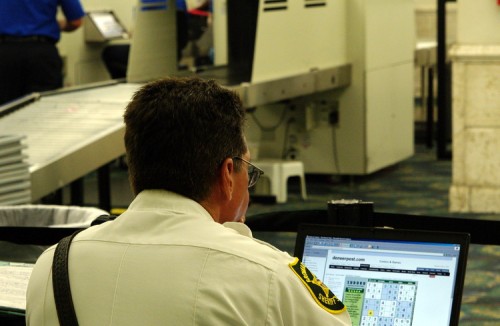 The Transportation Security Administration will block all websites that contain “controversial opinion” from its federal computers in the latest example of how Internet censorship is expanding in both the private and public sector as the federal government prepares to push through a power grab that will empower President Obama to shut down the world wide web with an emergency decree.

“The Transportation Security Administration (TSA) is blocking certain websites from the federal agency’s computers, including halting access by staffers to any Internet pages that contain a “controversial opinion,” according to an internal email obtained by CBS News.”

The new rules came into force on July 1, and prevent TSA employees from accessing such content, though what is deemed “controversial opinion” is not explained. Undoubtedly, the ban list will include websites which specialize in criticism of the government and federal agencies.

TSA’s scheme to uncover Terrorists before boarding flights, using the new technology “Spot–Screening Passengers by Observation Techniques” is believed by many to be a scam. Government paid millions of dollars for this alleged technology to train hundreds of TSA personnel to implement it. The new Screening Techniques include TSA security at airports tracking and monitoring a "Set Of Involuntary Physiological Reactions" to detect when a person “harbors malicious intent” as opposed to when someone is late for a flight or annoyed by something else. It should have been apparent to TSA/Homeland Security that few humans, including trained psychiatrists have the capability to differentiate sets of involuntary physiological reactions in Americans, different ethic groups and cultures to determine when someone is harboring malice intent; for example certain Asian cultures do not always show emotion; other cultures might overly express emotion. Any salesman boarding a flight may harbor malice, to smash his business competition, upon arriving at his business destination—and could show “A Set Involuntary Physiological Reactions” that appear to harbor malicious intent.” More recently it was reported TSA is considering buying a new technology that supposedly can analyze body-odor from a distance at airports to determine whether a passenger is under a certain kind of stress that signals hostility. This idea it isn’t worth discussing.

TSA’s new technology “Spot–Screening Passengers by Observation Techniques” may actually help sophisticated terrorists escape detection at airport checkpoints: TSA’s training may narrow the observation capability of TSA trained security personnel at airports to uncover terrorists, when TSA observers become dependent on or rely on specific techniques to Spot–Screen Passengers? U.S. Homeland Security recently was quoted in the LA Times as having said they stop and checkout people that don't show normal emotions at airports. For the most part that could be a wasted effort, millions of Americans are medicated for psychological issues and don’t show normal  emotions, especially when interrogated. A historical note: The USSR trained some of their Spies to monitor their physiological reactions to pass lie detector tests when they were lying. Russian KGB not only trained their Agents and Spies to "monitor" their body language, but to copy and implement other people’s' body language, mannerisms and speech patterns when on a mission, to prevent their own body language and speech patterns being read by observers. Russian training included covertly recording an agent’s speech and filming their “body language” when on a mini mission, then providing the sound video to the agent so he or she could repeatedly review the film to modify their body language and speech to avoid detection. Perhaps the best agents were sent to America. It is foreseeable a sophisticated terrorist might copy another person's non-threatening non-verbal elements (body language) and manner of speech to escape discovery, portraying a character type government investigators and Citizens would never imagine was a threat.

I agree Ross, except you could substitute "neofascist" or "neoconservative" for "neomarxist". He's really not a Marxist of any sort! He's a right-winger in left-drag.

Americans Are Getting Angry, Very Angry!

Obama and his Neomarxists intend to drown out the voice of Americans with Obama/Marxist propaganda, enforcing new regulations that will cripple bloggers and other alternative media from disseminating information, free speech that grass-roots among other organizations depend on to make informed decisions.

Obama’s support of the DISCLOSE Act confirmed what many Americans already believed; that Obama and certain Democrats in Congress intend to strangle the flow of information. If Obama and his leftists associations get their way, our Children will be brainwashed by Obama’s one-sided propaganda at school, through Obama controlled Radio, TV and Obama media policies that restrict the free flow of information. Historically when communists attempted or took over a country, one of their first steps was to control the media and all forms of public communications to control Civilian populations.

When Russia took over Hungary, it immediately took control of the Radio stations to thwart Citizen resistance and to psychologically control the People.

Considering the Obama administration’s obsession with controlling all media, one might ask, are some of the persons inside and outside U.S. Government, working with the Obama administration to push the Disclose Act and other censorship regulations, involved in causes that promulgate overthrow of the United States? While some in the Obama Government say they support dismantling capitalism, brick by brick, does their endgame call for destruction of the United States?  If it does, what should Americans do to stop it?

Does the Obama administration’s proposed censorship of free speech e.g., the Disclose Act threaten National Security? In other countries where members of political parties and ideological extremists attempted or succeeded in this kind of forced censorship, forbidding Citizens to receive information, they have been arrested for treason among other crimes.

Not Only Is There Fake News,...There Are Entirely Fake "Journalists" Who Do Not Exist

5G Friend or Foe: CHD's Dafna Tachover at the First Debate with Telecom

The Beat Goes On: Strangers At the Hodges Door

What is it With Computer Interviewing?