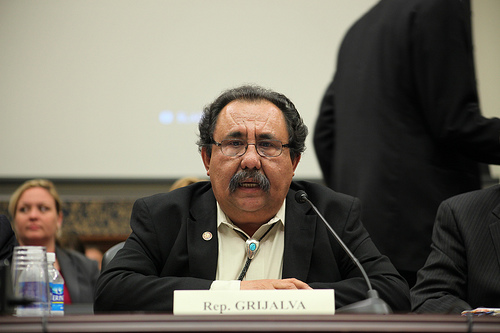 As the focus on Capitol Hill shifts to America's long-run fiscal woes, Congressional progressives are one step ahead of the White House and Democratic leaders in offering a counter-proposal to the House GOP approach.

The broad sketch proposes to end the Bush-era tax cuts on high income earners, enact a surtax on millionaires and billionaires, increase the the estate tax and eliminate corporate tax loopholes and subsidies for oil and coal companies. It also aims to create a public health insurance option, end the wars in Iraq and Afghanistan, and invest $1.45 trillion in "job creation," energy, housing and education programs.

The revenue-heavy proposal (PDF) stands in stark contrast to the spending cuts-oriented plan put forth by House Budget Committee Chairman Paul Ryan (R-WI) -- and championed by GOP leaders -- that slashes $6 trillion in federal programs (including Medicare and Medicaid) while significantly reducing taxes for wealthy Americans and corporations.

"This budget is transparent, straightforward and realistic about where we are in America right now," Rep. Raul Grijalva (D-AZ), co-chair of the progressive caucus, told Raw Story. "The Ryan plan, for all the credit it gets for thinking big, doesn’t reflect the reality of the American economy. It destroys the successful programs that made this country strong, especially Medicare and education, and doesn't even try to explain how it creates jobs. It reflects a faith that making government disappear will somehow create prosperity."

The plan is a nonstarter in the GOP-led House and would have a hard time winning over more than a handful of Democrats in the Senate. But Grijalva and his progressive caucus co-chair Rep. Keith Ellison (D-MN) wrote a letter urging Rep. Chris Van Hollen (D-MD), the top Democrat on the budget committee, to consider their ideas in the Democratic counter-offer this week.

In contrast to the Ryan plan, which the nonpartisan Congressional Budget Office says will eliminate the deficit by 2040, the progressive proposal -- which its authors have dubbed the "People's Budget" -- promises to yield surpluses by 2021, though it doesn't provide numbers to back the claim.

How Congress and the Federal Reserve Stole Christmas by Ron Paul

The Crazy Government Research Projects You Might've Missed in 2019

As the Fiscal Doomsday Machine Powers On " Impeach the Congress, Too!

The Military's Sci-Fi Fantasy For The Super Bowl Of Wars

The US as Israel's Colony