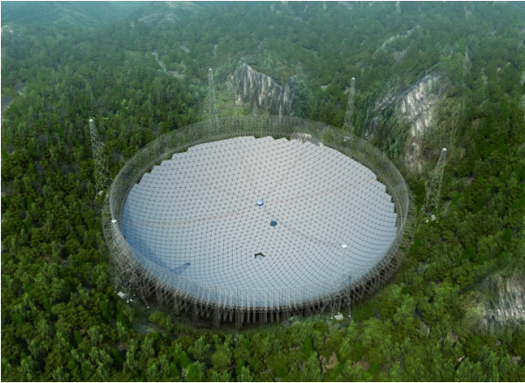 Puerto Rico’s Arecibo Observatory will soon be the world’s largest radio telescope no more. After years of planning, China has broken ground on the Five-hundred-meter Aperture Spherical radio Telescope (FAST), a massive bowl-shaped radio signal collector that will be the world’s most sensitive when it opens for business in 2016.

FAST’s framework was China’s engineering contribution to the Square Kilometer Array (SKA), the international initiative to build a radio telescope with a full square kilometer of telescope surface area. That project has moved ahead and is now considering sites in South Africa and Australia where arrays of smaller distributed telescopes will be integrated into massive radio collecting instrument. But Chinese engineers knew that a massive, singular reflector like FAST was feasible and in 2006 gave the project the green light, choosing a natural depression in Guizhou province in southern China as FAST's home.

A new paper now details the progress in FAST’s design since then, and it shows that while FAST is rooted in Arecibo’s successful design, several engineering tweaks and the addition of a now-characteristic Chinese flourish--make it bigger and more powerful--mean that FAST will be able to see three times further in to space than Arecibo, scanning larger sections of the sky and processing all that data more quickly.

How? Arecibo has a fixed spherical curvature, so radio waves are focused into a line above the dish where more mirrors focus them to a single point that can be processed by instruments. Because of the way this works, Arecibo can only really use 221 meters (725 feet) of its 305-meter (1,000-foot) dish at any give time.

But a similar setup for FAST’s 500 meter (1,640 feet) array would result in the overhanging mirrors weighing some 11,000 tons. So instead the dish itself will focus the radio signals, using a subset of the dish’s 4,400 triangular aluminum panels to form a roughly 1,000-foot parabolic mirror--nearly the size of the entire Arecibo dish--within the larger bowl. This dish-within-a-dish can be formed anywhere across the larger bowl, allowing FAST to examine more of the sky.

Further, the receiver hanging above the dish will be capable of collecting and studying signals from 19 sky regions simultaneously, compared to Arecibo’s seven. That makes for one speedy, strong radio telescope, faster and stronger than any existing instrument on the planet. As such, it should yield the sharpest radio observations of pulsars, supernovas, and other astronomical phenomena.

Perhaps more interestingly, it will also join SETI in the search for extraterrestrial life. FAST should be able to detect extraplanetary transmissions at distances of greater than 1,000 light years.

1 Comments in Response to Inside FAST, Soon to be the World's Biggest and Baddest Radio Telescope

This, and other useless programs, are completely okay. If you spread the money that they cost, among the people in the U.S. who are losing their homes and jobs, you wouldn't give any of them enough to save themselves. So get on with it.