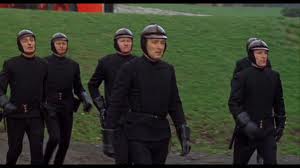 Emerging Totalitarianism
Wednesday, January 11, 2012 – by Adrian Krieg
Being over 70 years old and having lived through WWII in Europe and lived in Mexico, I have an excellent understanding of what dictatorships are and how they function. The fact that America is rapidly heading into a despotic state is obvious to anyone of my age. Furthermore, every branch of our government is involved. The Supreme Court recently ruled that the charge of 'assistance to terrorism' does not necessitate an overt act; all that is required is providing assistance and/or encouragement to the act. That in effect means anything, for instance, calling the executive a fool, writing a pro-Palestinian article, objecting to Israeli Middle East policies, holocaust denial – anything the bureaucracy disapproves of becomes a violation of this law.

Under the newly enacted – sponsored by McCain (R-AZ) with approval of 93 (STUPID) Senators – National Defense Authorization Act (NDAA), the president was granted the right to arrest and detain any American citizens any place in the world without a charge, indefinitely, without right to council, without a warrant, and to torture any such American, merely on his say-so or by indictment of a secret court whose members are anonymous. This totally obliterates the habeas corpus provisions of the Constitution. Furthermore, this law eradicates the Posse Comitatus Act [18 U.S.C. 1385] of June 18, 1887 that prevented the government from employing American military against American civilians.

The president already took upon himself the right to assassinate any American citizen any place in the world without charge, trial, judge, jury and evidence of a crime, simply on his say-so, and has already used that authority to murder.

The enacted in 2001 and re-approved in 2011 USA Patriot Act is the most sinister of all, in that it violates the first, fourth, fifth, sixth, seventh, eighth, ninth and tenth amendments of the Bill of Rights. In expansion, it grants the government the right to rifle your mail, tap your telephone and inquire into what you are reading. In a stunning overturn of well-accepted fourth amendment rights a federal court has granted government the right to track your movement with GPS technology, including via cell phones and GPS equipment.

3 Comments in Response to Emerging Totalitarianism

My father was a totally disabled combat veteran (Iwo Jima). Shortly before he died, he told me, "All the things we fought against in World War II, our own government is doing to us today."

All I have to say is:

In reality, Washington DC has declared itself the OWNERS OF THE WORLD. What few of You people know, Washington DC is NOT EVEN a Part of the United States "OF AMERICA" It is simply called the United States which consist ONLY of Washington DC, Puerto Rico, Guam, Marriana Islands and Virgin Islands. Hasn't anyone ever wondered WHY Your Post Office is simply UNITED STATES Postal Service and Not UNITED STATES OF AMERICA. Because it's OWNED ONLY By Washington DC. Same as UNITED STATES DISTRICT COURT which, BY LAW, have NO AUTHORITY over ANYTHING BUT "MARITIME LAW " YOU the people have ALLOWED Washington to make you their Whores and Slaves. In reality, it is TO LATE to change anything. You have let yourselves be pushed to far in the corners, Everyone is now programed to say, Yes Sir, No Sir, Gee I'm Sorry Sir. WELCOME TO YOUR UNITED STATES OF AMERICA PRISON People. DON'T be a Rebel Like I am and FIGHT FOR YOUR FREEDOM