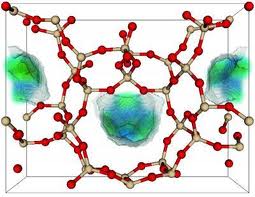 The research by scientists at Rice University, the University of California, Berkeley, Lawrence Berkeley National Laboratory (LBNL) and the Electric Power Research Institute (EPRI) was published online this week in the journal Nature Materials.

Coal- and natural-gas-fired power plants account for about half of the carbon dioxide (CO2) that humans add to the atmosphere each year, but current technology for capturing that CO2 and storing it underground can gobble up as much as one-third of the steam the plant could otherwise use to make electricity.

"It looks like we can beat the current state-of-the-art technology by about 30 percent, and not just with one or two zeolites," said study co-author Michael Deem, Rice's John W. Cox Professor of Bioengineering and professor of physics and astronomy. "Our analysis showed that dozens of zeolites are more efficient than the amine absorbents currently used for CO2 capture."

Commercial power plants do not capture CO2 on a large scale, but the technology has been tested at pilot plants. At test plants, flue gases are funneled through a bath of ammonia-like chemicals called amines. The amines are then boiled to release the captured CO2, and additional energy is required to compress the CO2 so it can be pumped underground.