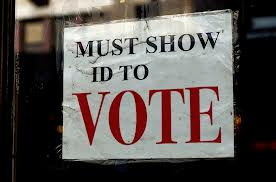 Most proposed or enacted voter ID statutes include a requirement to prove eligibility to vote by presenting proof of identity, and require that proof to be some kind of government issued ID. Such requirements are unconstitutional. Voters may constitutionally be asked to prove eligibility, but not identity. The two are not the same.  Eligibility can be proved without revealing identity. It is unconstitutional to deny a right or privilege for failure to present something one is not constitutionally required to possess, and there is no constitutional authority that requires anyone to even have a name. Eligibility can be proved in various ways that do not disclose identity. The traditional way was for a notary or other official who knows the person to testify that he is eligible. His testimony, such as an affidavit, would be the proof. The individual’s identity would be disclosed to the notary, but need not be disclosed to anyone else. Now of course the witness has to be trustworthy, but that is no different from trusting the clerk who prepares and issues an ID card.Some go so far as to propose a national ID system. Proponents of such a system suffer from a naive faith that government is benign, with only rare exceptions, and can be trusted with the power that would come with control of personal identification in their hands. But such an ID would immediately become a national ID card for all other purposes as well, as the convenience of it would drive the emergent behavior of people everywhere.
Suppose such a proponent says something critical about some government official. Suppose some anonymous clerk then amends his record in the central identification database. Now he is a “fugitive, child-molesting cop-killer terrorist, armed and dangerous”. Suppose he goes in to vote, and, just as he is raising his pen to sign the register, a swarm of cops pours in and guns him down, pointing to the pen and saying, “He was holding a weapon!” Cops who shot him are put on paid administrative leave pending the investigation, which finds the shooting justified, and the cops return to duty without even a negative comment on their records.
The elevation of personal identity to the importance accorded it today is an innovation in our legal tradition. Historically it has had much less importance, usually where ownership of property was involved.

1 Comments in Response to Identity vs Eligibility: Most voter ID statutes unconstitutional

Actually, it is the States that are unConstitutional. When you look at what States are, and how they evolved over the decades, you will find that your State is something not included in the U.S. Constitution qualification for statehood, or in the State Constitution description. This makes the State something that does not have to follow Constitutional voting requirements.

Do we really have a Democracy? Look at the picture that is pained in the article. Read between the lines. It is a picture of complete fascism, where Constitutional requirements are adhered to as long as it is convenient for those in power to do so. And the convenience revolves around how well they are able to pull the wool over the eyes of the sheeple, keeping them in ignorance regarding the kind of Government that they have, while at the same time exercising anything they can get away with.

So, we don't really have a Democracy, and certainly not a Constitutional Republic.

Is what we have working? Yes, to some great extent. But there isn't any foundation to it. We can see this by all the economic problems, and how our freedoms in some ways are far less than what the colonists had when ruled by Britain back in the late 1700s.

What can we do about it? The first thing is to wake the people up to what is really going on... how they are being used, and how they are losing their freedom.

The second thing is to show the people that they need to follow basic moral laws, like the ones in the second table of the Ten Commandments. In addition to these, it would be a good idea to strongly consider the other moral laws found in the Bible, in Exodus through Deuteronomy. NOTE: IT'S NOT WHERE THE LAWS ARE FROM THAT COUNTS. IT IS WHAT THE LAWS ARE THAT MAKES THEM WORTHWHILE, or not.

It might be a good idea to make the pre-election platforms of all elected Government officials to be a binding contract with the people, under fear of the penalty of death.

The fourth (and possibly most important) requirement would be the teaching of FULL CONSTITUTION understanding to all children grades 1 - 12.

The fifth would be multitudes of PRIVATE media at all times, reporting to the people. This would include full access by any of the people, at any time, to anything and everything done by the Constitutional Republic Government.

Make any additions to this list that you think would be beneficial. Check out http://www.teamlaw.net/ so that you will see that most of Government is not illegal in what they are doing. Rather, they are illegal in the way that they are existing. And voting is simply endorsing the Government as it is.

WAKE UP, and stop fighting yourselves by voting in something that is totally against your principles and against the Government you think you have.