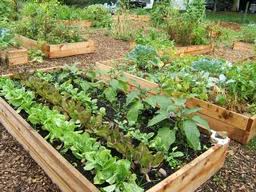 They wanted to beautify the city by planting lovely and useful vegetables, provide renters and apartment dwellers with a patch of land they could cultivate, and give back to the community by teaching their neighbors how to grow their own food. They had a dedicated group of volunteers willing to work to make that vision a reality. All they needed was a little extra exposure, and who better to contact than the city's recognized organization dedicated to beautifying the city?  Keep Copperas Cove Beautiful is a board of volunteers approved by the city council to advise the council about community improvement. They're primarily known around town for picking up litter on the roadside and reminding people to recycle. In fact, if you call their listed phone number you get the city's recycling center. KCCB's Executive Director and the city's Recycling Coordinator are the same person- Silvia Rhoads.

Perhaps that's why Keep Copperas Cove Beautiful doesn't act much like a volunteer community-based organization. Sheena and Mike had too many dreadlocks and tattoos between them. The KCCB rep looked them, and looked at the work they did volunteering for NORML (National Organization for the Reform of Marijuana Laws) and said that to protect the city's image they couldn't associate with them. Never mind that they're both long-time residents of the city who own their home and pay taxes here. They just weren't the right sort of people.

They shook it off, and moved the garden to a vacant lot in the city managed by Dr. Joe Burns, the superintendent of schools for Copperas Cove ISD. Dr. Burns knew them, and they trusted him. Until Dr. Burns went to the city to get the water turned on. He came back and told them to vacate the premises immediately, because he would be working with Keep Copperas Cove Beautiful.

Down but not out, they decided to go the private property route. They found an abandoned house with broken windows and an overgrown, weedy lot. They tracked down the property owner, an elderly individual who lived out of state, and got permission to use the land if they kept the property looking nice. Volunteers invested hours of work and donated hundreds of dollars worth of equipment and material. The garden was finally coming along.

Then the original owner passed away, and the heirs fought over the property in court. The son gave them permission to continue. The day the daughter was awarded ownership, she called the Copperas Cove police from California and demanded they immediately arrest anyone found on the property. The officers declined to arrest them on sight, but told Mike and Sheena to grab what they could and get gone, because if they came back they'd go to jail. They had to abandon just about everything.

When I saw Sheena post that they were out of options and just about ready to give up, I contacted her. That spring I had been unable to plant my large garden. I had raised beds, compost, rainwater cisterns- everything on site they needed to relocate. They could finish the year here.

They were nice, hardworking, knowledgeable people. I really enjoyed meeting them and working with them. We gave free classes on things like plant propagation and water conservation, taught homeschoolers, hosted a seed exchange, met with our local soup kitchen to see about providing them with fresh produce and holding canned food drives for them in the off season, and started working with a local Girl Scout troop.

Then the city figured out where they had went. Code Compliance hung violation notices on my door for a small banner I had displayed on my garage. They told me to move the directional sign I had displayed near the road to the other side of the sidewalk. They damaged my private property. After being told by the Code Compliance officer that they weren't liable for that last one, I raised hell with the city manager. She offered to reimburse me for the damage, and I thought the matter was settled.

By this time the growing season was over, and Mike and Sheena had located an empty lot on a major road. The owner had given them permission to use and improve upon the property, turned the water on for them, and since it was in a more visible location they decided to move the main garden there.

That was several months ago. This Saturday there was another notice from Code Compliance on our garage door. The notice was not even about my property. It was about a sign displayed at the new location. The notice said they had seized the sign, and threatened to cite me for displaying an "off premises" sign. It was obvious that the officer had removed the sign without even attempting to contact the owner of the property it was displayed on, otherwise he would have known that it wasn't "off premises". He had not even attempted to call the number on the sign, which would have put them in contact with Sheena who could have told him the same thing. Instead he claimed that the he saw the 2" logo on the paper flyer I had on my door that advertised the community garden and saw that the phone number matched. This is the same paper flyer that had been distributed to and displayed by businesses all over the city.

I spoke with the Code Compliance officer on the phone. He attempted to threaten me with fines and legal action for violating city ordinances, and I rebutted with unlawful seizure of property in violation of the Fourth Amendment. He said somebody could come to city hall and reclaim the sign they had seized. I told him I didn't understand why someone should have to take time out of their busy day to go and reclaim the sign that they had stolen, and that he should go put it back. He said he would try and contact the property owner to ascertain if they had given permission to post the sign.

The owner of the empty lot that was the most recent location of the garden succumbed to the intimidation tactics used by the city last week, and asked the garden to vacate. Even though the sign was seized unlawfully, he said he can't deal with the pressure. I can't blame him- having city officials threatening to levy fines and take legal action against you can be pretty intimidating.

The most baffling thing about this is the backwards attitude the city has toward this garden. It stands out even in comparison to other local cities. Killeen just lavished money on a lovely facility for the Farmer's Market, and nearby Harker Heights gave their Community Garden an excellent location in the city park, complete with raised beds and water. We asked for nothing from them, did all our work with volunteers and donated material, and got this kind of treatment.