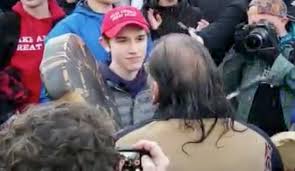 Judge William O. Bertelsman ruled that seven Washington Post articles and three tweets focusing on the Covington Catholic High School student, who became the center of a viral confrontation with a Native American elder in Washington, D.C., earlier this year, were protected by the First Amendment and deemed opinion.

"Few principles of law are as well-established as the rule that statements of opinion are not actionable in libel actions," Bertelsman wrote. "The statements that Sandmann challenges constitute protected opinions that may not form the basis for a defamation claim."

Sandmann's suit characterized the Post's coverage as libelous. The judge, however, cited case law that the statements made in the stories on Sandmann must be "more than annoying, offensive or embarrassing."

Instead, the judge found, the statements must expose the party — in this case Sandmann — to public hatred, contempt and ridicule.

the statements must expose the party — in this case Sandmann — to public hatred, contempt and ridicule according to the judge. look what happened to him as well as the other students there, nearly kicked out of school, thousands of negative comments on social media. included many offers he needed to be taken behind the wood shed. And yet when the truth finally came out no apogee's were people could easily read it. Yet the paper has the Gaul to say they believe in accurate reporting???? Fake news at it finest got away with another false story.....