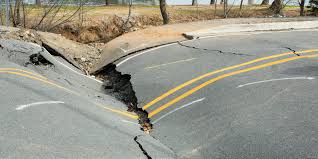 Last week, a county in central Kansas experienced something quite unusual for the region: within a five day period, there were eleven earthquakes. Kansas is not a particularly earthquake-prone state, taking spot #41 on the U.S. Earthquake Index. This means that the chance of earthquake damage in Kansas is much lower than the national average.

This shocking increase in seismic activity began with a magnitude-2.4 earthquake last Wednesday morning. The quake occurred around 2 1/2 miles southwest of Hutchinson, Kansas, in Reno County, according to the United States Geological Survey (USGS). It was followed by ten more earthquakes, reports The Kansas City Star:

The second came just before 8 a.m. on Friday. The magnitude-4.2 shook the area, centered less than a mile southwest of Wednesday's temblor. More than 1,000 people reported feeling the quake across Kansas, Oklahoma, and Missouri, according to the USGS.

It wouldn't be the last quake on Friday. A magnitude-3.1 quake shook the area about 10 minutes later followed by four more tremors through the day ranging from magnitude 2.4 to 3.0, according to the USGS.

Seismic activity in the area continued on Saturday with three more quakes — magnitudes 2.0 to 3.0 — before a magnitude 4.1 shook the area early Sunday morning, according to the USGS. (source)