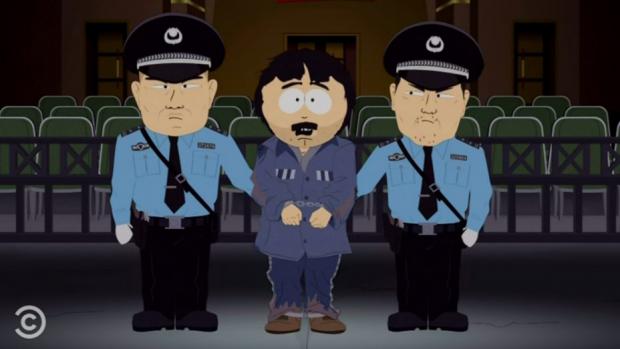 After the "Band in China" episode mocked Hollywood for shaping its content to please the Chinese government, Beijing has responded by deleting all clips, episodes and discussions of the Comedy Central show.

The most recent episode of South Park, "Band in China," has been generating loads of media attention for its sharp critique of the way Hollywood tends to shape its content to avoid offending Chinese government censors in any way whatsoever.

Now, those very same government censors, in the real world, have lashed back at South Park by deleting virtually every clip, episode and online discussion of the show from Chinese streaming services, social media and even fan pages.

A cursory perusal through China's highly regulated internet landscape shows the show conspicuously absent everywhere it recently had a presence. A search of the Twitter-like social media service Weibo turns up not a single mention of South Park among the billions of past posts. On streaming service Youku, owned by internet giant Alibaba, all links to clips, episodes and even full seasons of the show are now dead.

And on Baidu's Tieba, China's largest online discussion platform, the threads and subthreads related to South Park are nonfunctional. If users manually type in the URL for what was formerly the South Park thread, a message appears saying that, "According to the relevant law and regulation, this section is temporarily not open."

The draconian response is par for the course for China's authoritarian government, which has even been known to aggressively censor Winnie the Pooh because some local internet users had affectionately taken to comparing Chinese president Xi Jinping to the character.

On Monday afternoon, creators Trey Parker and Matt Stone issued a statement with a faux apology about the ban.

"Like the NBA, we welcome the Chinese censors into our homes and into our hearts," the statement reads. "We too love money more than freedom and democracy. Xi doesn't look like Winnie the Pooh at all. Tune into our 300th episode this Wednesday at 10! Long live the great Communist Party of China. May the autumn's sorghum harvest be bountiful. We good now China?"

South Park's "Band in China" episode featured a pair of storylines critical of China. One involves Randy getting caught attempting to sell weed in China and getting sent to a work camp similar to those Beijing has been using in Xinjiang Province to hold as many as a million Chinese Muslims for political indoctrination. (While he's at the work camp, Randy runs into an imprisoned Winnie the Pooh)