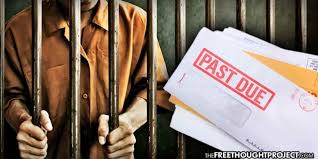 If you doubt this claim simply look at the mega banks caught laundering money for terrorists and drug dealers who never go to jail. Or, look at the financial institutions who are constantly caught stealing from American citizens in fraudulent schemes and merely pay a fine to avoid any jail. Or, look at the massive tech companies who get caught illegally exploiting millions of children, pay the state, and face no other consequences. If you are a common citizens, who doesn't happen to have billions of dollars, however, you can and will be sent to jail for a very long time for being unable to pay the state.

A father of two in Philadelphia is learning about this two-tiered system of justice in the land of the free the hard way this month after his inability to pay just $1,941 in court costs led to him being kidnapped and caged for years. To be clear, Maurice Hudson, 29, had already done his time for a burglary charge that happened over a decade ago. Despite being sentenced to two to four years behind bars in 2009, the state still wanted their cut. But Hudson — a struggling father and part time janitor — didn't have the extra cash around to just give to high paid judges.

This made the judge in the case seemingly angry with Hudson who then scolded the struggling father for being unable to pay the ridiculous court costs.

"Each time, he has come back here with excuses," Judge Genece Brinkley said of Hudson.