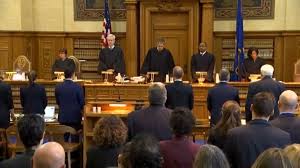 The Supreme Court said Tuesday a survivor and relatives of victims of the Sandy Hook Elementary School shooting can pursue their lawsuit against the maker of the rifle used to kill 26 people.

The justices rejected an appeal from Remington Arms that argued it should be shielded by a 2005 federal law preventing most lawsuits against firearms manufacturers when their products are used in crimes.

The court's order allows the lawsuit filed in Connecticut state court by a survivor and relatives of nine victims who died at the Newtown, Connecticut, school on December 14, 2012 to go forward.

The lawsuit says the Madison, North Carolina-based company should never have sold a weapon as dangerous as the Bushmaster AR-15-style rifle to the public. Gunman Adam Lanza used it to kill 20 first graders and six educators. It also alleges Remington targeted younger, at-risk males in marketing and product placement in violent video games. Lanza was 20 years old.

'The families are grateful that the Supreme Court upheld precedent and denied Remington's latest attempt to avoid accountability,' said Joshua Koskoff, a lawyer for the Sandy Hook families.

2 Comments in Response to US Supreme Court rules than Sandy Hook families and survivor CAN sue Remington...

another bogus law suit who's main purpose is to harass the gun company. last I saw there were no stipulations on the guns the 2nd amendment referred to. Also did the shooter see any commercial the company put out and did he even notice the brand of gun used in the games? Did he even play the game? Hope Winchester can recoup the money they spend defending themselves.from the very people who are suing.

Anybody can sue anybody. A "2005 federal law preventing most lawsuits against firearms manufacturers when their products are used in crimes," can easily be bypassed if the suit is done properly. There is no need for a Supreme Court ruling on it. In fact, the SC has nothing to do with it except that someone asked them to rule on it. And since they ruled, that's as far as it goes. They don't have anything else to do with it until someone asks them again. Amendments 6 & 7 show that it is the jury that rules, provided the suit asks for a jury ruling.