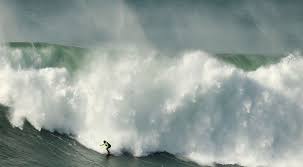 Earlier this month the news broke that a set of fearsome 20-metre (65-feet) waves were coming to the small town of Nazare on Portugal's Atlantic coast.

The message spread like wildfire and soon extreme surfers and sports fans -- as well as keen photographers -- arrived at the town's Praia de Norte beach.

They gathered on the roof of a red lighthouse, listening to the deafening roar and watching in awe as the waves smashed against the cliffs. From the viewing point you cannot see where the waves end, giving the illusion the colossal walls of water could engulf their audience.

But the masses just missed out on seeing French surfer Justine Dupont have the ride of her life on November 13.

It could be a new surfing world record set by a woman.

"I began riding the wave, I felt I was going faster than usual, and that it was steeper," the 28-year-old surfer tells AFP.

"I had the feeling it was never ending... I could fly away!"

The Politics Behind Banning Russia From The Olympics