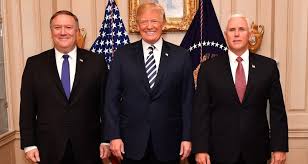 After presiding over a far-right coup in Bolivia, the US dubbed Nicaragua a "national security threat" and announced new sanctions, while Trump designated drug cartels in Mexico as "terrorists" and refused to rule out military intervention.

One successful coup against a democratically elected socialist president is not enough, it seems.

Immediately after overseeing a far-right military coup in Bolivia on November 10, the Trump administration set its sights once again on Nicaragua, whose democratically elected Sandinista government defeated a violent right-wing coup attempt in 2018.

Washington dubbed Nicaragua a threat to US national security, and announced that it will be expanding its suffocating sanctions on the tiny Central American nation.

Trump is also turning up the heat on Mexico, baselessly linking the country to terrorism and even hinting at potential military intervention. The moves come as the country's left-leaning President Andrés Manuel López Obrador warns of right-wing attempts at a coup.