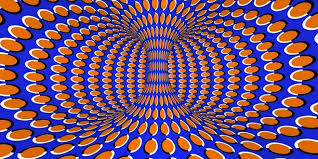 The annual illusion contest is run by the Neural Correlate Society, a non-profit organization dedicated to the promotion of scientific research exploring the neurological foundations of perception and cognition. This is the 15th year the contest has run, and the top 10 illusions are shortlisted by an expert judging panel before the top three are voted on by attendees at an annual gala event run by the society.

This year's top prize went to an illusion called Dual Axis, from game developer Frank Force. The deceptively simple illusion tricks the brain into perceiving a spinning knot simultaneously rotating around a vertical and horizontal axis. Speaking to Scientific American, Force says the illusion was inspired by his discovery of mathematical principle called a Lissajous curve.

"The underlying math equations to form this [illusion] are themselves ambiguous in terms of rotation, so it is interesting how our mind is unable to deal with this and settles into a picture about what direction and axis it is rotating," says Force. "Also, our mind pictures it as a 3D object while there is nothing actually happening that is 3D."

Second place went to an incredible illusion exploring how the colors we see can be influenced by our perception of motion. Called Change the Color, the illusion presents something that initially seems like red and green dots moving from the top to the bottom of the screen. However, when the viewer shifts their perspective to interpret the dots as moving horizontally they rapidly become yellow, and not red or green.