> The Iranian Protests Are a Washington Orchestration - Freedoms Phoenix 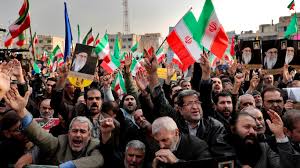 The Iranian government, like the governments of Russia and China, permits NGOs financed by their Washington and British enemies, to operate in Iran.  Insouciant, indeed stupid, Iranian students receive money, encouragement, organization, and protest power from the foreign-financed NGOs.

To show how stupid the students are, according to reports they are chanting that the enemy is not America, the country threatening to bomb them, but the Iranian government.  After Iraq, Libya, and Syria, one wonders why the Iranian students want their country in a similar state of chaos and destruction.  One wonders why the government funds a university that produces such stupid students.

I have never seen an explanation of why countries on Washington's regime change list permit Washington to finance fifth colulmns within their country.  Are Iran, Russia, and China trying to demonstrate how democratic they are by accepting treason?