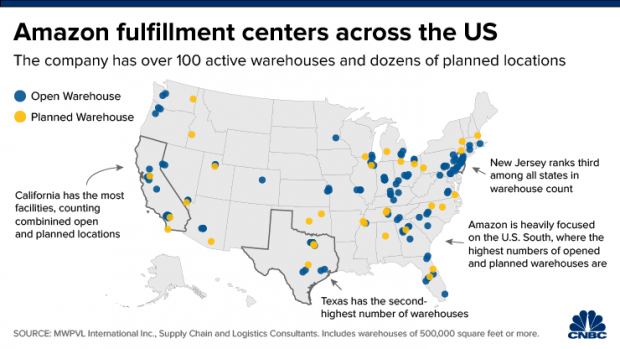 One major way Amazon has been able to achieve this goal is by building out a sprawling network of warehouses around the country. These facilities are typically at least 100,000 square feet in size and house all kinds of product inventory.

Amazon launched its warehouse network in 1997 with two fulfillment centers in Seattle, Washington and New Castle, Delaware. The company began adding new locations at a rapid pace in 2005, according to MWPVL International, a supply chain and logistics consulting firm.

Within the last two decades, Amazon fulfillment centers have popped up in almost every corner of the U.S., as the company has pushed to bring items closer to customers to enable faster deliveries. Amazon doubled down on that effort last April when it announced it would shorten Prime's two-day free shipping plan to one day.

This map shows where Amazon's fulfillment centers are scattered across the country. Amazon said it has more than 110 active fulfillment centers in the US and more than 185 centers globally. Of the centers on the map, 33 are planned locations that have either been confirmed by Amazon or published in media reports.