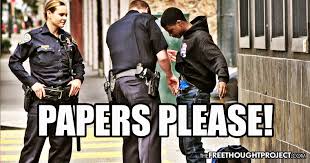 Kentucky — An ominous bill that is currently making its way through the Kentucky Senate aims to give police unprecedented unconstitutional powers. These new powers will allow cops to stop anyone they want and demand that person tell them who they are, where they are going, and explain their actions. Naturally, it has civil rights advocates up in arms, but it doesn't seem to be slowing down the bill's momentum.

Police merely need to make an unsubstantiated claim that a person is involved in criminal activity which gives them free reign to stop that person, demand his name, home address and age — as well as ask to see his driver's license, if he has one — and tell him to explain what he is presently doing "to the satisfaction of the officer."

If you invoke your constitutional right not to answer the officer's questions, this new bill grants cops the right to detain you for two hours. Even more ominous is the fact that this detainment is not considered an arrest so you have no right to an attorney and police don't even have to record it. This non-arrest grey area detention will undoubtedly be rife for abuse.

Nevertheless, advocates for the police state tyranny say cops must have this new ability—to keep us safe. As Kentucky.com reports, Sen. Stephen Meredith, R-Leitchfield, said Grayson County law enforcement officials asked him for the bill after a number of local incidents showed the need for it.

"If a man acts suspicious, then why wouldn't you want to know what his name is?" Meredith said in an interview. "I can't imagine any legitimate reason in the world why a person would refuse to give their name and photo identification to a police officer if they were asked."

2 Comments in Response to New Bill To Allow Cops To Detain Citizens, Force Them To Explain Who They Are, What They're Doin

A police officer who breaks the fundamental law of the 4th Amendment has broken his oath of Office, no matter what subsequent laws are. Statute laws are not above the 4th Amendment. --- Police people applied for the job voluntarily. When they obey illegal and unlawful orders, they are doing so voluntarily. If a judge upholds their illegal and unlawful actions, the judge is doing so voluntarily, and needs to be sued if he will not change upon notice. --- The state governor is the Chief Magistrate for a State. If he will not discipline his State judges, he is voluntarily guilty. Same with the judge as with a cop.

The Nuremberg trials show us that it is not the office that an official holds that is fundamental. Rather, it is his position as a man/woman that is the major factor in his/her relationships with other people. --- If a cop does anything that breaks the fundamentals regarding how to treat other people, he is guilty, just like the the WW2 German officials were found guilty in the Nuremberg Trials of poor treatment of other people. --- A cop without a man/woman can't do anything. If the cop breaks the law, it is a man/woman breaking the law. Sue the man/woman, not the cop. The law is the 4th Amendment.