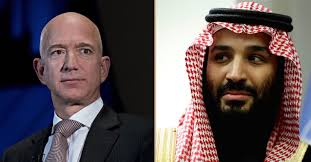 Fears have been raised that Saudi Crown Prince Mohammed bin Salman could have amassed compromising information on dozens of wealthy, famous and powerful figures after he was accused of hacking the phone of Jeff Bezos.

Salman is said to have scalped huge amounts of data from Bezos's phone starting in May 2018, after the pair had swapped numbers a month earlier during the prince's schmoozing tour of the US and UK.

It comes as UN investigators - who have called for an immediate US probe into the hacking claims - warned attendees at the World Economic Forum in Davos against swapping details with Saudi officials over security concerns.

Agnes Callamard, a UN investigator who has seen evidence of the alleged hacking hacking, told The Guardian that Davos attendees are 'extremely vulnerable' to hacks.

'I am disappointed that organisers did not put any emphasis on surveillance on their agenda,' she said.

Speaking about the hack against Bezos, she added that it appears Saudi Arabia was not targeting specific data on his phone - but was on a phishing expedition aimed at gathering a broad range information which might prove useful in future.