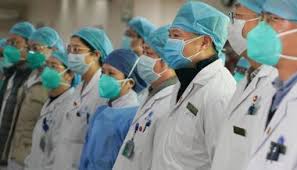 A 56-year-old woman locally identified as "Chen" was said to have been cured from the illness.

The patient was reportedly released from quarantine after further examinations to prevent the spread of infections.

Chen was a resident of Wuhan–the city where the Coronavirus originated–for several years, according to RT.

She reportedly felt flu-like symptoms on January 10 before being admitted to hospital on January 12.

After nearly two weeks under medical care, she has now been released, cured from the disease, it has been claimed.

The Express also published claims from Chinese doctors indicating that trial runs with an HIV wonder drug have "somewhat successfully" stopped the spread of the disease to cells.

The study concluded that "Nelfinavir could decrease the production of virus from cells".

Since the intercontinental spread of the disease–which has now claimed 26 lives and has infected hundreds of others–35 million people are currently on lock down and five entire cities are quarantined.

In Wuhan local authorities have hemorrhaged funds in order to counter the deadly virus.

1 Comments in Response to China Claims To Have 'Cured' First Patient With Coronavirus As 90,000 Suffer