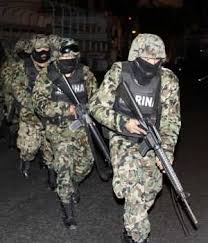 To combat this, statists have erected a police state in the American Southwest that consists of a broad array of totalitarian-like measures that have contributed to the destruction of liberty in America.

One of the fascinating aspects of this phenomenon, however, is that with their war on drugs, statists — both conservatives and liberals — are themselves responsible for causing aberrant flows of illegal immigrants and people seeking refugee status. That's because their drug war in Mexico has produced so much violence that it has induced countless people to flee the country and try to enter the United States. Thus statists are, in large part, responsible for causing the very situation that they themselves lament.

This phenomenon was recently detailed in an article entitled "Mexico Does Little as Thousands Flee Violence for US Border" by Tim Seller, which appeared in the Arizona Daily Star (Tucson.com). Referring to a town named Leonard Bravo in the Mexican state of Guerrero, Seller writes:

So many people have been forced from their homes in this highland area of southern Mexico that the mayor gives a form letter to local residents who want to seek asylum in the United States. In the last 14 months, Mayor Ismael Cástulo Guzmán told me, he's handed out around 600 of them…. In Nogales, Sonora, early this month, 40 percent of the people waiting for asylum appointments with U.S. officials were from Guerrero.