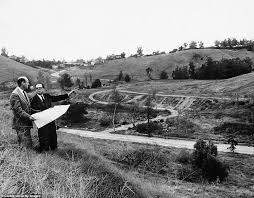 In a typical retelling of the Dodgers' 1957 move from Brooklyn to Los Angeles, it's New York's most-populous borough that plays the role of the only victim.

By fleeing to the West Coast after failing to secure a new stadium in New York, team owner Walter O'Malley was perceived to be robbing millions of Brooklynites of their identity.

'Dem Bums,' as the Dodgers were affectionately known, had built baseball's most colorful fan base despite failing to win a World Series until 1955. Most notably there was Hilda Chester, a staple at Ebbets Field in Flatbush who famously proclaimed her presence with a sign reading 'Hilda is Here!' The crumbling stadium was also home to the Dodger Sym-PHONY band, whose members could favorably be described as 'musicians,' but whose talents were commensurate with a club that dated its struggles back to the 1880s.

The use of the borough rather than 'New York' was a departure from the city's other two Major League Baseball teams, the Bronx's Yankees and Manhattan's Giants.

Then there was the nickname, which referred to the Brooklynites who dodged the borough's innumerable trolleys at the risk of being pulverized.