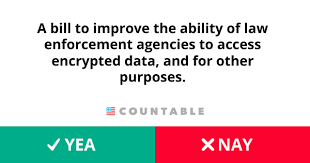 Dumas had spent years gathering intelligence in Europe to assist the Americans in their revolt against Britain. But the two needed a secure way to pass information across the Atlantic.

So they developed a special cipher– a crude form of encryption where letters and words were substituted for numerals.

At the same time, the physician James Jay (brother to the first Chief Justice of the Supreme Court, John Jay) developed an invisible ink so that revolutionary leaders could communicate in secret.

These encrypted communications became critical to the Revolution. And it's safe to say there would probably not be a United States if they hadn't developed a secure way to send information.

Ironically, politicians are trying to destroy modern methods of encryption.

. . . a few US Senators have once again proven that chilling political adage– 'never let a good crisis go to waste.'

Exhibit A: Senate Bill 4051, the "Lawful Access to Encrypted Data Act", which was quietly introduced last week when everyone's attention was consumed elsewhere.