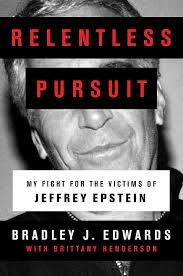 Lawyer Bradley Edwards first came across Maxwell's name back in 2008

He discovered Maxwell was seemingly complicit in her ex-lover's crimes

She is even said to have occupied herself by reading Mr Edwards' book on Epstein as she awaited her arrest last week in New Hampshire by U.S. police

he dramatic arrest of Ghislaine Maxwell last week would have been a proud moment for Bradley Edwards, the US lawyer who has devoted his life to securing justice for young women abused by Jeffrey Epstein. In his gripping book, Relentless Pursuit, stories from which we summarised earlier this year, Edwards revealed the appalling scale of Epstein's crimes. Now, as Maxwell faces up to 35 years in jail and contemplates helping the FBI, we reveal the book's shocking claims about Maxwell's involvement in Epstein's years of abuse…