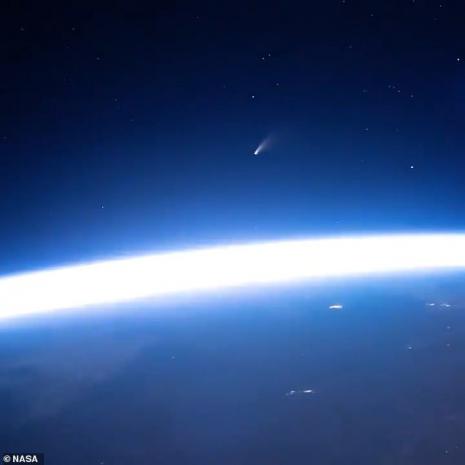 An amazing video showing the comet Neowise, with its shimmering tail as it appears to fly over the Earth, is captured by cameras on the International Space Station.

Formally named C/2020 F3, the comet was discovered in late March by the NEOWISE space telescope and will be visible with the naked eye throughout July.

A video of the 'interplanetary iceberg' was shared on social media by Seán Doran, who created the stunning clip by taking a time-lapse image sequence from ISS cameras and converted them into a real time video.

Neowise is a visitor from the most distant parts of the solar system and as it comes closer to Earth it is a 'once-in-a-lifetime' chance to see it in the night sky.

To view the comet in the UK you'll need to stay up late as it is best viewed at about 02.30 BST in the north-east sky anywhere in the country - just above the horizon.

The comet is currently millions of miles away from Earth and during its closest approach on July 23 will still be 64 million miles from the planet.

It won't be a particularly bright comet compared to the likes of Hale-Bopp, widely seen in 1997, but it will look 'spectacular' with binoculars, astronomers claim.

Neowise reached its closest point to the Sun on July 3, when it was a similar distance to the star as Mercury and will become clearer from Earth as it gets closer.

Observers all over the world are racing to see the natural fireworks display before the comet speeds away into the depths of space.

Even the astronauts aboard the International Space Station spotted the comet from their vantage point high above Earth's atmosphere.