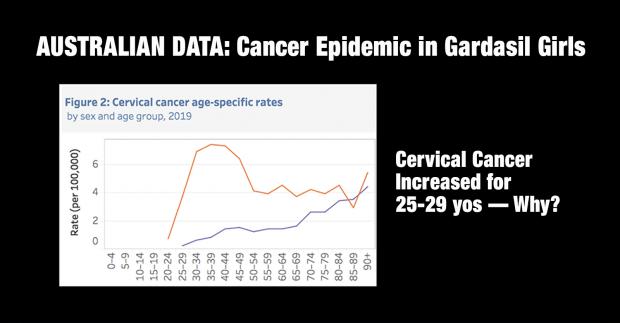 The Australian government's cancer data show the dramatic rise in cervical cancer in young girls vaccinated with Gardasil. Merck markets Gardasil as a prophylactic against cervical cancers despite the company's own pre-licensing studies that showed a 44.6% INCREASE in cervical cancers among girls exposed to HPV virus prior to vaccination (up to 30% may be exposed in the birth canal).

The obsequious global press have widely quoted and credited the claims of the Gardasil vaccine's inventor, Ian Fraser (who collects millions in Gardasil royalty payments), that Gardasil is poised to abolish cervical cancer in Australia. The official data put the lie to Fraser's chicanery. Since 2007, all girls and women up to age 26 have been offered the HPV vaccine in Australia. Government numbers show a 16% cancer increase in 25-year-olds, a 28% increase in 30-year-olds, several years post vaccination. The 30-year-old's rate increased from 5.4/100k to 6.9/100k. The 25- year-old's rate rose ?from 3.2 to 3.7 per 100k.

Meanwhile, deaths in older women (unvaccinated) are decreasing possibly due to successful early Pap screening. This points to the vaccine as the clear culprit in vaccinated women—either from 1) vaccine failure, 2) reduced Pap screening (likely due in some cases to confidence in the HPV vaccine), 3) type replacement (the 9 HPV strains targeted by the vaccine are replaced by more virulent strains) or from 4) pathogenic priming. Fraser also dismisses the stories of tens of thousands of girls globally who blame Gardasil for their catastrophic autoimmune diseases. "Those girls would have gotten those autoimmune diseases in any case," Fraser told me last month. "They have nothing to do with the vaccine."