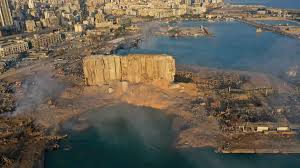 Facing oh so timely color revolution-style "protests", the current Lebanese government led by Prime Minister Diab has already resigned. Even before the port tragedy, Beirut had requested a $10 billion line of credit from the IMF – denied as long as trademark, neoliberal Washington consensus "reforms" were not implemented: radical slashing of public expenses, mass layoffs, across the board privatization.

Post-tragedy, President Emmanuel Macron – who's not even capable of establishing a dialogue with the Gilets Jaunes/Yellow Vests in France – has opportunistically jumped in full neocolonial mode to pose as "savior" of Lebanon, as long as the same "reforms", of course, are implemented.

On Sunday, France and the UN organized a videoconference to coordinate donor response – in conjunction with the European Commission (EC), the IMF and the World Bank. The result was not exactly brilliant: a paltry 252 million euros were pledged – once again conditioned by "institutional reforms".