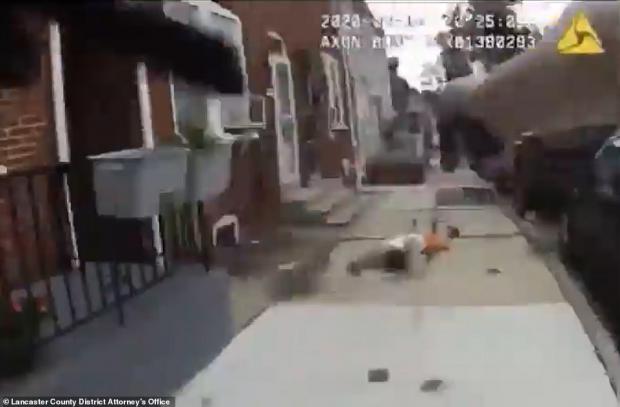 Police shot dead a 27-year-old man - who was awaiting trial for stabbing and seriously injuring four people - after he charged at an officer while brandishing a huge knife over his head.

Officers in Lancaster, Pennsylvania were called to a home at 4.15pm yesterday by Ricardo Munoz's sister who said he had become aggressive toward their mother and was trying to break into her house.

Body camera footage released by the Lancaster County District Attorney's Office shows the 27-year-old emerging from the house as soon as an officer arrived 10 minutes later.

Munoz could be seen charging at the officer while brandishing a knife above his head 'in clear view' and 'in a threatening manner' before the officer fired at him. He died at the scene.

Yesterday's shooting sparked protests in the city, with people marching from the scene of the shooting to the Lancaster Police Department while chanting 'this is what democracy looks like'.

Munoz was awaiting criminal trial on four counts of aggravated assault before he was shot dead yesterday. He also had previous charges of stalking, harassment and criminal trespassing.