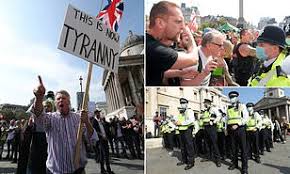 Hundreds descended on Trafalgar Square on Saturday afternoon for a "Resist And Act For Freedom" rally, including some bearing 5G conspiracy placards and signs declaring Covid-19 a "hoax", with police repelled by human blockades as they tried to clear the area around Nelson's column.

Dozens of officers, including some on horseback and in riot gear, were pushed back by crowds who chanted and cheered, with some throwing missiles.

At least one protester was seen with a bloodied head while another was seen receiving medical attention on the ground, but the London Ambulance Service did not immediately have information on any injuries.

The London landmark was cleared of protesters after 5pm, and Scotland Yard said 32 people were arrested.

The force said the large crowds were "putting themselves and others at risk" just a day after Mayor of London Sadiq Khan warned it is "increasingly likely" restrictions will be needed to slow the spread of coronavirus in the capital, adding he was "extremely concerned" about the rate of transmission in London.

The number of cases per 100,000 people over seven days is reported to have increased in London from 18.8 to around 25.

Police said they had to take "enforcement action to disperse" the crowds after officers who had attempted to "explain, engage and encourage them to leave" were met with "hostility" and "violence" from some demonstrators.