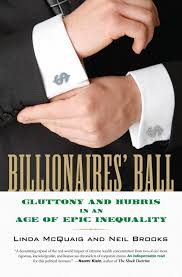 Do you hear the pathetic bleating of America's billionaires and their army of toadies? If not, you soon will, for a remarkable report has been released that documents the $50 trillion in earnings that's been transferred to the Financial Aristocracy from the bottom 90% of American households in the past 45 years.

The report was prepared by the RAND Corporation, and has a suitably neutral title: Trends in Income From 1975 to 2018. (The full report can be downloaded for free.)

Just as remarkable is the no-holds-barred coverage of the study by Time magazine, an iconic publication of the mainstream media: The Top 1% of Americans Have Taken $50 Trillion From the Bottom 90% -- And That's Made the U.S. Less Secure.

Longtime readers know I've reported on the astounding increase in America's economic inequality for the past 15 years, and addressed the eventual banquet of consequences this imbalanced, destabilizing state of affairs will serve up.

But with few exceptions, the corporate media has ignored this fundamental reality of American life, and blown off the consequences as easily ignored speculation by marginalized bloggers and commentators. ("Would somebody please shadow-ban these sites going on and on about soaring inequality? Thank you, Facebook, Google and Twitter--we'll return the favor directly.")