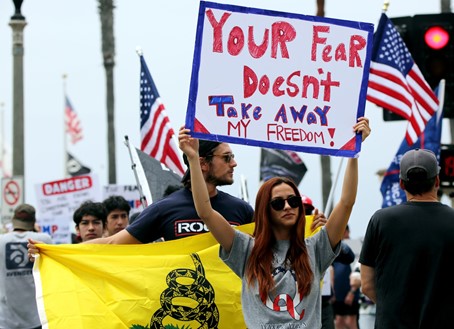 Let's face it, Americans love convenience! Big box stores like Home Depot, Walmart and Target have ridden the convenience train to untold wealth. Amazon has tapped into the love of convenience by enabling us to "shop" from our couches. No more pesky hunting for the credit card and having to type in all that info. Just one click and you're done!

And yes I'll admit I enjoy convenience too. But too much convenience can be a trap if we're not careful. The American Revolutionary War was fought to throw off the shackles of tyranny in a quest for freedom and liberty. It was not very inconvenient for the American colonist to leave their homes, farms, businesses and loved ones to fight what many believed was a hopeless cause against the most powerful military in the world at that time.

And yet they were willing to gamble their lives, leave their families for long months even years, and suffer deprivation, exposure to the elements, hunger and misery for what? A chance, slim though it might be for FREEDOM!

Our Freedom hangs in the Balance

Yet today virtually all of the freedoms our forefathers fought, bled, and many died for are in grave jeopardy. So the question is do you value your freedom and liberty enough to be inconvenienced? I ask because when I go in a Walmart or the grocery store or Home Depot virtually everyone is wearing a mask, except me.

I've spoken with any number of people who've said basically the same thing, "I don't necessarily believe the mask makes much difference but I just don't want to be hassled, so I wear it." In other words what they're really saying is their right to live as free men or women isn't worth being inconvenienced or heaven forbid, marked as a trouble maker.

When You Don't Know Who To Vote For